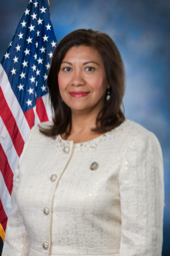 Congresswoman Norma J. Torres represents California's 35th Congressional District in the Inland Empire which includes Bloomington, Chino, Fontana, Montclair, Ontario, Pomona, and Rialto. She previously served as a State Senator, Assembly Member, and as a Mayor and Council Member in the City of Pomona. Throughout her career in elected office, she has worked to make government more responsive to the needs of Inland Empire residents. As State Senator, Torres played a significant role in making the Affordable Care Act work for California’s patients and consumers. Her law to diversify the Covered California Board so that it would be better prepared to enroll the uninsured, earned her statewide recognition and national attention. As Chair of the Committee on Housing and Community Development, she led an effort that secured $2 billion in federal funds for the “Keep Your Home California” program, which helped thousands of families keep their homes during the foreclosure crisis. Fighting crime and making sure public safety systems are responsive to the needs of the community has been a lifelong priority for Torres. As a former 9-1-1 dispatcher, she drew on her expertise to author a law that modernized the 9-1-1 system—resulting in a system that now routes cell phone callers to their local police department, rather than a statewide hotline, during an emergency. Now on her third term in Congress, Torres currently serves on the powerful House Appropriations and Rules Committees. The Appropriations Committee is responsible for appropriating all federal spending, domestic and abroad. As a member of the Rules Committee, she helps determine the consideration of all legislation on the House floor. Previously, she served on the Foreign Affairs, Homeland Security, and Natural Resources Committees. As a member of the Foreign Affairs Committee, Torres worked to address the root causes of migration from Central America and has fought to ensure accountability and transparency for U.S. funds spent abroad. Notably, her amendment to require the Secretary of State to send Congress a list of corrupt officials in Honduras, El Salvador, and Guatemala was adopted in the National Defense Authorization Act for Fiscal Year 2019 and signed into law. On the Homeland Security Committee, she worked to tackle the many serious national security challenges facing the nation. In the committee, Torres prioritized the need to address cybersecurity risks at the nation’s ports. Specifically, at the ports of Los Angeles and Long Beach, where most of goods imported traverse the Inland Empire. In October 2018, her Strengthening Cybersecurity Information Sharing and Coordination in Our Ports Act was passed into law as part of the five-year reauthorization of the Federal Aviation Administration. Torres also served on the Natural Resources Committee, where she championed initiatives that would strengthen Indian’s Country’s ability to become more self-sufficient and address the disturbing increase in murdered and missing Native American women. Her amendment to the National Landslide Preparedness Act that addresses increased risk of landslides and flooding due to wildfires passed in the House. Torres immigrated to the United States from Guatemala at age five and is a longtime resident of the Inland Empire. She resides in Pomona with her husband Louis, and their two sons Robert and Matthew. Her third son, Christopher, is an Air Force veteran. Torres received her bachelor’s degree in Labor Studies from the National Labor College in Silver Spring, Maryland.

Congresswoman is speaking at

Congresswoman Norma J. Torres (CA-35), the Co-Chair of the Congressional Central America Caucus and a native of Guatemala, will share her perspective on the importance of addressing corruption and promoting good governance and key preconditions of future direct foreign assistance by the United States.