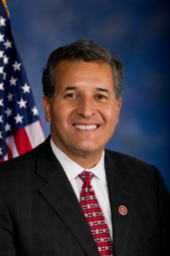 Congressman Juan Vargas was raised on a chicken ranch in National City. He is one of ten children, born to his parents, Tomas and Celina Vargas on March 7, 1961. His father, Tomas, immigrated to the United States from Mexico in the late 1940s as part of the Bracero Program. Through the Bracero Program, Tomas became a legal resident and Juan’s mother, Celina, went on to earn her U.S. Citizenship. As a young adult, he entered the Jesuits, where he worked with disadvantaged communities in the jungles of El Salvador and focused on the health and welfare of children and issues of social justice. Taught the value of hard work by his parents, Juan attained impressive academic credentials. He attended the University of San Diego on scholarship, graduated Magna Cum Laude receiving a Bachelor of Arts in Political Science in 1983. In 1987, Juan earned a Master of Humanities from Fordham University in New York City and in 1991 earned a Juris Doctorate from Harvard Law School, where he was a classmate of President Barack Obama. Since beginning a career in public service, Juan has contributed to his community by serving on the San Diego City Council, the California State Legislature, and now as a Member of Congress. Juan represents California's 51st Congressional District, which encompasses south San Diego County, Imperial County, and California's entire U.S.-Mexico border. In Congress, Juan is working for the priorities of his district and fighting to pass comprehensive immigration reform, protect DREAMers, save Medicare and Social Security, and ensure that our country's veterans have access to the benefits and services they rightfully earned. Juan lives in San Diego with his wife, Adrienne, an Associate Vice President at San Diego State University, and his daughters, Rosa and Helena.

Congressman is speaking at