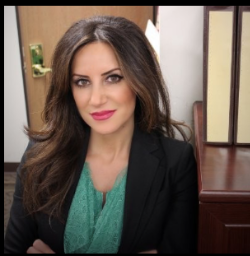 Mona Makki, Director, ACCESS Community Health and Research Center is an impassioned proponent of rights for underserved members of the community, Mona has fearlessly advocated against crime and domestic violence for over a decade. Throughout her career at ACCESS, she has committed herself to improving and empowering the lives of individuals and families who suffer from domestic and sexual abuse, chronic diseases and behavioral health issues. She has worked tirelessly to collaborate with judges, faith leaders, schools and police departments in the fight against such abuse. As the Director of the Community Health and Research Center, she oversees over 70 programs in healthcare, mental health and public health divisions. These programs include a medical center with infectious disease specialty, a community mental health facility and various prevention programs including tobacco and substance abuse, domestic and sexual violence, and cancer screening. In addition to her work at ACCESS, Mona serves on a multitude of community boards, including Michigan Center for Contextual Factors in Alzheimer’s Diseases, Beaumont Community Advisory Board, University of Michigan Community Advisory Board, Wayne State and ACCESS Research Committee, Healthy Dearborn Steering Committee, Michigan Department of Health and Human Services Stakeholders Committee and Detroit Community Health Assessment Steering Committee. She has also served on the Greater Detroit Area Health Council’s board and the University of Michigan-Dearborn’s Institutional Review Board. She is also a member of the Michigan Coalition Against Domestic and Sexual Violence and has served as a member of the Arab American Coalition Against Domestic Violence and the Wayne County Council Against Family Violence. Additionally, Mona served as the Chair for the 8th Arab Health Summit. Mona received her master’s degree in Clinical Psychology from the University of Detroit Mercy in 2004 and has been a member of the American Psychological Association since 2006. She has conducted research, in collaboration with local universities, on topics including Intimate Partner Violence and Reproductive Coercion Among Arab American Women in Southeast Michigan, Aging and Memory, cardiac arrest, cancer, trauma and loss among Arab American, American Indian and Alaskan Native youth.

Mona is speaking at

Evening Keynote Panel: Lessons Learned and a Look Ahead: Perspectives from Members of the Michigan Coronavirus Task Force on Racial Disparities
December 1, 2020

COMMUNITY ENGAGED RESEARCH SYMPOSIUM: ADVANCING HEALTH EQUITY - THE IMPACT OF CORONAVIRUS NOW AND IN THE FUTURE
Dec 1 - 2, 2020
Too hard to browse the agenda in your phone? Not to worry, we have a mobile app for you. Besides agenda viewing, you can also see who else is attending and talk with them ahead of time.