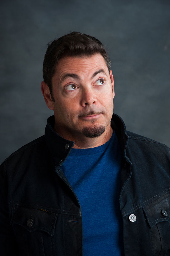 Hersh Rephun served as a publicist for some of the most high-profile and awarded commercial directors and production companies in the world, before diving headlong into Standup, and emerging as a podcaster bridging the worlds of comedy and advertising. Hersh’s career spans two decades as a writer and creator of multi-platform content, marketing and PR campaigns for a diverse clientele, from filmmakers to fashion brands. His production and postproduction clients, including Jason Reitman (Juno, Up in the Air), Theodore Melfi (Hidden Figures, St. Vincent), the Anonymous Content roster, Union Editorial and Union Entertainment Group, have been honored with every major industry award, from Oscars to Cannes Gold Lions, the Palme d’Or, Grand Prix, AICP, DGA, Clio and One Show. He has helped challenger brands like BEARPAW become market players, and leads North American creative for Ccilu International, an award-winning footwear brand sold in 60 countries and now in the US. A background in advertising and promotion, paired with comedy chops earned at standup gigs across the country (The Comedy Store, Comic Strip Live, Funny Bone, Comedy Cellar…), and screenwriting credits on cult films featuring spaceships, bikinis and Bruce Campbell (Assault on Dome 4), led to the creation of YES, BRAND: The Podcast, in which Hersh talks with entrepreneurs, brand execs, marketers, filmmakers, artists, comedians and other “truth experts,” to explore the dual attributes of honesty and deception. His diverse guest list includes Birkenstock Americas CEO David Kahan, author and Forbes contributor Jonathan David Lewis (Brand vs. Wild), and filmmaker DeMane Davis (OWN's Queen Sugar). In addition to traveling extensively as a host, moderator and performer, Hersh serves as Chief Creative Officer of brand storytelling firm Propeller5.

Hersh is speaking at

Hersh Rephun traveled the road from produced screenwriter and fledgling comedian, to a media professional who, at one time, oversaw a bicoastal PR firm with a roster of 40 clients in the ad biz. He's now a Podcaster and a Creative Director helping brands find their funny. How did he end up at EntreFEST? It has a lot to do with being able to handle - and laugh at - the truth. In this standup set, Hersh takes the audience on an entertaining journey through the pitfalls of business, marriage, and raising 3 millennials and 2 gen Z'ers.

Sounds pretty heavy, I know - but the good news is:


Comedy is a coping mechanism. Literally, comedy is the injection of irony into a scenario that might otherwise bring us down. We’ve heard often that comedy = tragedy + time. That adage, however, predates the Internet. I’m not sure that we have time to let tragedies blend with perspective to result in a humorous take. We are processing difficult information - from natural disasters to man-made disasters - at such a rate that we can barely get over one news item before another one hits us square in the face.

Combine this pace with an unprecedented era of “Fake News,” and trust becomes seemingly impossible to establish.

What does this have to with entrepreneurship and innovation? Everything. A business can only succeed if it is trusted to deliver on its promise. If you’re an innovator, or an entrepreneur, how do YOU break through to your prospective customers? How do YOU win their trust in a faithless society? This is issue is at the heart of my talk.

EntreFEST 2018
May 16 - 18, 2018
Too hard to browse the agenda in your phone? Not to worry, we have a mobile app for you. Besides agenda viewing, you can also see who else is attending and talk with them ahead of time.