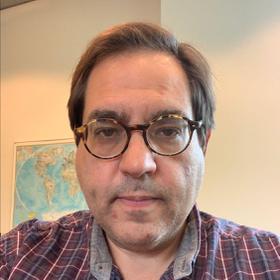 Peter W. Klein is an Emmy Award-winning journalist and is Executive Director of the Global Reporting Centre. He is a former 60 Minutes producer, and is currently Professor of Journalism at the University of British Columbia Graduate School of Journalism. He was director of the school from 2011 to 2015. He is also a faculty associate at the UBC School of Public Policy and Global Affairs. Klein runs the Global Reporting Program, a year-long course in which he works with master’s journalism students from UBC and other universities worldwide to study and practice global reporting. This course grew out of the decade-long International Reporting Program, in which School of Journalism students traveled around the world to work with news organizations including The New York Times, Toronto Star, The Guardian, PBS Frontline, Vice News and Al Jazeera, producing documentary projects that have won awards from most of the major news organizations including the National Academy of Television Arts & Sciences (Emmy for Best Investigation), Society of Professional Journalists (Sigma Delta Chi), Radio Television Digital News Association (Edward R. Murrow), International Academy of Digital Arts and Sciences (Webby Honour), the Online News Association (OJA), Editor & Publisher (EPPY), Canadian Association of Journalists (CAJ), Digital Publishing Award, and Canadian Online Publishing Award. At the Global Reporting Centre, Klein oversees long-term investigative reporting projects, including Hidden Costs, a SSHRC Partnership-funded initiative that uses data, field reporting, academic research and artistic exhibits to examine the hidden costs of global commerce. He was co-investigator on a CIHR-funded project looking at expensive drugs for rare diseases, through which he and his students produced Million Dollar Meds, an award-winning multimedia documentary, as well as a CBC Ideas episode. In 1999 Klein joined CBS News 60 Minutes as a producer. He continues to contribute to the venerable American news program, and is also a regular contributor to The New York Times’ Retro Report series, which examines old news stories from new perspectives. He began his career as a reporter for public radio and The Christian Science Monitor, covering the Bosnian war and the 1994 invasion of Haiti, and he has covered war zones around the world. In 1995 he was one of three founding producers of New York Times Television, a pioneer of small-format TV newsgathering. He was senior producer of I-Witness, an 18-hour documentary series for CBS News in which video journalists spent months in the field covering a single topic, and he went on to film, edit and he filmed and produce his own news documentaries, spending as much as a year shadowing his subjects for ABC News Nightline specials. He was creator and executive producer of the History Channel documentary series Beyond Top Secret, which investigated clandestine operations around the world and earned numerous Emmy nominations, as well as mentions in The New York Times and on The Daily Show with Jon Stewart. From 2009-2010, he was the host of the national Canadian television program The Standard, in which he conducted interviews with global newsmakers. In addition to a Emmy for a Frontline documentary with his UBC students, Klein won an Emmy for his 60 Minutes investigation with Mike Wallace into the former Soviet Union’s smallpox weapons program, and shared an Emmy for a documentary about global health. He was a Rosalynn Carter Mental Health Journalism fellow at Emory University (researching suicide amongst genocide survivors), and an Ochberg Fellow at the Columbia University’s Dart Center for Journalism and Trauma (research PTSD amongst journalists). He received the 2011 UBC President’s Award for Public Education through Media. Klein has previously taught at Columbia University’s Graduate School of Journalism and New York University’s Department of Journalism. He has an MS in Journalism from Columbia and a BA (honours) in Philosophy from Pennsylvania State University, with specialized honours degrees in Economics and in Science, Technology and Society.

Peter is speaking at

How do you follow consumer products from their origin in mining towns, farms, and fishing grounds on the other side of the world to supermarket shelves and clothing stores? You investigative supply chains – the networks between companies and their suppliers. They may include providers of raw material, firms that convert the material into products, storage facilities and distribution centers, and retailers who bring the ultimate product to consumers. The products are as varied as the marketplace: clothing, electronics, vehicles, food, medicine. Investigations have revealed forced labor, environmental crimes, corruption, and human rights abuses. Yet uncovering the connections can pose significant challenges. Come hear from three experts who know how to follow the trail.

As investigative journailsts expand the scope  of their newsrooms, partnerships, and topics, they increasingly are collaborating with groups that would have seemed unlikely just a few years ago: data scientists, health researchers, environmental scientists, social workers, and more. Here are three pioneers in reaching across fields, from the US, Canada, and India.