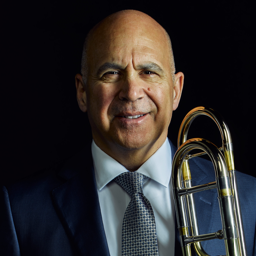 The Gurnee F. and Marjorie L. Hart Chair Joseph Alessi was appointed Principal Trombone of the New York Philharmonic in the spring of 1985. He began musical studies in his native California with his father, Joseph Alessi, Sr. As a high school student in San Rafael, California, he was a soloist with the San Francisco Symphony before continuing his musical training at Philadelphia’s Curtis Institute of Music. Prior to joining the Philharmonic, Mr. Alessi was second trombone of The Philadelphia Orchestra for four seasons, and principal trombone of L’Orchestre symphonique de Montreal for one season. In addition, he has performed as guest principal trombonist with the London Symphony Orchestra in Carnegie Hall led by Pierre Boulez. Mr. Alessi is an active soloist, recitalist, and chamber music performer. In April 1990 he made his solo debut with the New York Philharmonic, performing Creston’s Fantasy for Trombone, and in 1992 premiered Christopher Rouse’s Pulitzer Prize-winning Trombone Concerto with the Philharmonic, which commissioned the work for its 150th anniversary celebration. His most recent appearance with the Philharmonic as soloist was in world premiere performances of William Bolcom’s Trombone Concerto in the winter of 2017. Mr. Alessi also has appeared as soloist with the New York Philharmonic in performances of concerti by Kazimierz Serocki, Bramwell Tovey, and William Grant Still. In August of 2021 he will give the world premiere of the Chick Corea Trombone Concerto with the Säo Paulo Symphony Orchestra in Brazil. Joseph Alessi has recorded and performed extensively with five prominent trombone quartets; The New York Trombone Quartet resulting in the only recording of Bartok’s 4th String Quartet, Aries Trombone Quartet, Four of a Kind Trombone Quartet, the World Trombone Quartet, Aries Trombone Quartet, and Slide Monsters Trombone Quartet. Other solo engagements have included the New Japan Philharmonic, Nagoya Philharmonic, Orchestra of Teatro Bellini, Mannheim National Theater Orchestra, Hauge Philharmonic, Helsinki Philharmonic, and the Colorado, Alabama, Santa Barbara, Syracuse, and Puerto Rico symphony orchestras.. Mr. Alessi has also participated in numerous festivals, including the Festivale Musica di Camera in Protogruaro, Italy; Cabrillo Music Festival; Swiss Brass Week; and Lieksa Brass Week in Finland. He was featured in the 1997 International Trombone Festival in Feldkirch, Austria, and the International Meeting of Brass Instruments in Lille, France. In 2002 Mr. Alessi was awarded an International Trombone Association Award for his contributions to the world of trombone music and trombone playing, and in 2014, was elected President of that association. Mr. Alessi is currently on the faculty of The Juilliard School; his students now occupy posts with many major symphony orchestras in the U.S. and internationally. As a clinician for the Eastman-Shires Instrument Co., he has also given master classes throughout the world and has toured Europe extensively as a master teacher and recitalist. He has performed as soloist with several leading concert bands, including the U.S. Military Academy Band at West Point, U.S. Army Band (Pershing's Own), and the U.S. Marine Band (President's Own). In addition, he has performed with the Maria Schneider Orchestra, the Village Vanguard Orchestra, and has recorded with jazz greats, J.J. Johnson and Steve Turre. Mr. Alessi’s discography includes many releases on the Summit record label, including the Trombonastics, and a disc with New York Philharmonic Principal Trumpet Philip Smith entitled Fandango; he also recorded New York Legends on the Cala label. His live recording of the Rouse Concerto with the New York Philharmonic can be heard on Volume II of the recent release, An American Celebration, on New York Philharmonic Special Editions, the Orchestra’s own recording label. Mr. Alessi was invited by the International Trombone Association to record a solo disc of newly composed works, which was distributed to the Association’s membership of 5,000 trombonists. in early 1999 and is now available as Beyond the End of the Century through Summit Records. His recording of George Crumb’s Starchild on the Bridge record label, featuring Mr. Alessi as soloist, won a Grammy Award for 1999–2000. Other recordings featuring Mr. Alessi are with the Canadian Brass (Sony Classical and Philips Records). Further information about Mr. Alessi can be found on his website, www.slidearea.com. Mr. Alessi plays exclusively on a Shires-Alessi model trombone.

Joseph is speaking at

The Trombone Retreat, a podcast of the Third Coast Trombone Retreat, hosted by Sebastian Vera and  Nick Schwartz has in-depth conversations with trombonists from all areas of our field. We talk with  guests about what led to their path and success, the challenges, adversity and memorable moments along the way, and their views on the role of an artist in our current times. Our interviews encapsulate the silly and heartfelt aspects of our unique lives and seek to inspire and motivate musicians of all ages  and backgrounds. In our first ever live podcast recording in front of an audience we are honored to  interview Joseph Alessi on his beginnings before he was a household name in the trombone world, what  traits and experiences led him to where he is today as well as what motivates and inspires him now.  Hear all our interviews at tromboneretreat.com/podcast and subscribe anywhere you download your  podcasts.

Principal trombonist of the New York Philharmonic and preofessor at Juilliard School of Music Joe Alessi presents a clinic designed for the Youth Workshop participants.

CSU Recording Studio is inviting you to a scheduled Zoom meeting.