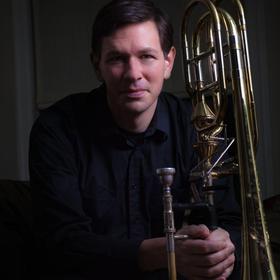 George Curran became the bass trombonist of the New York Philharmonic in 2013. Prior to that, he was a member of the Atlanta Symphony Orchestra and a fellow with the New World Symphony. Mr. Curran has participated in several recording projects, including "Roadwork" with the Atlanta Trombone Project, "A Beautiful Noise" with the CSU Trombone Choir, "Legacy" with Southeast Trombone Symposium artists, and a full length solo CD called "Vital Signs." Mr. Curran is a founding member of Southeast Trombone Symposium, has performed multiple recitals at the International Trombone Festival and has been a featured soloist and clinician at several other trombone workshops, including Slide Factory, the Arctic Trombone Festival, and the Association of Spanish Trombonists. Twice he was a soloist and judge at the Jeju International Wind Ensemble Festival in South Korea. Mr. Curran has also performed concertos with bands in Carnegie Hall, at the American Trombone Workshop, and at the Midwest Clinic in Chicago, and with many collegiate ensembles. A native of Farmington Hills, Michigan, George Curran received a bachelor’s degree from Central Michigan University and a master’s degree from the University of Cincinnati College-Conservatory of Music. His principal teachers have included John Rojak, Peter Norton, and Dr. Bob Lindahl. Mr. Curran is an S.E. Shires Trombone artist and plays on his own line of mouthpieces by Ultimate Brass. He is on the faculties of Rutgers University, Manhattan School of Music, and Mannes School of Music.

George is speaking at

The Natural Slides Trombone Ensemble is the premier trombone ensemble at the University of Central Arkansas. It is composed of the top eight to twelve players from the University of Central Arkansas trombone studio and admittance into the ensemble is determined by competitive auditions held at the beginning of each semester. The Natural Slides is conducted by Dr. Justin Cook, Assistant Professor of Trombone at UCA and is assisted by Dr. Christopher M. Sharp as well as the studio Graduate Assistant, Chad Wiley.

Justin Cook is the Assistant Professor of Trombone at the University of Central Arkansas where he teaches studio trombone, trombone choir, brass ensembles, low brass methods, and directs the Jazz Repertory Ensemble. Prior to his appointment at UCA, Dr. Cook was on the faculties of Tarleton State University, Eastfield College, and the University of North Texas. In addition to his college teaching, Justin has been on staff at the Blue Lake Fine Arts Camp in Twin Lake, Michigan, Phantom Regiment Drum and Bugle Corps in Rockford, Illinois, and is currently the Festival Manager for the International Trombone Festival and Auditor Coordinator for the Southeast Trombone Symposium.

Equally at home as an educator and performer, the UCA trombone studio has seen tremendous success since Dr. Cook’s arrival. The studio has tripled in size and now features two trombone choirs: The BearBones Trombone Choir, and the Natural Slides Trombone Ensemble. The trombone choirs have performed at the American Trombone Workshop in Washington D.C., the Big 12 Trombone Conference at Texas Tech University, the Arkansas Music Educator’s Conference, the Texas State Trombone Symposium, the 2018 International Trombone Festival at the University of Iowa and were featured performers at the 2018 Midwest Clinic in Chicago, IL. Dr. Cook’s students have graduated and been accepted to some of the world’s most prestigious universities and conservatories as well as finalists at the American Trombone Workshop Solo Competition, the Big 12 Trombone Conference Solo Competition, the International Women’s Brass Conference Solo Competitions, as well as the UCA Student Spotlight and Concerto Competition. Dr. Cook has presented clinics and masterclasses at universities all across the United States and in 2019, presented a session on brass pedagogy at the Midwest Clinic. While in Texas, Dr. Cook served as the brass caption head and worked on staff with the Flower Mound High School Marching Band and Concert Bands. In Arkansas, he is an active band and brass clinician as well as an active marching band adjudicator throughout the region.

The Southeast Trombone Symposium Professors Choir was founded by Dr. Bradley Palmer at the inaugural STS in 2010. The membership includes current and former STS faculty, along with a number of artist-teachers from around the country. The group performed at the 2013 and 2018 International Trombone Festivals, and is proud to be featured for the 50th anniversary edition of the ITF in partnership with the STS in 2021. The ensemble is featured on the Artists of the Southeast Trombone Symposium CD recording "Legacy" and can be seen on the STS YouTube channel.


The Eastern Kentucky University Trombone Society is comprised of graduate and undergraduate music students from Eastern Kentucky University. The group has been featured at the International Trombone Festival, American Trombone Workshop, Kentucky Music Educators Association State Convention and at many campus events. Their repertoire comprises five centuries of music, including many commissions written directly for them.

Nathan Siler has served as principal trombone with the Orquestra de la SEC in Xalapa, Veracruz, Mexico and as a member of the Charlotte Symphony Orchestra. He has performed with the Cleveland Orchestra, San Diego Symphony, Cincinnati Symphony, Baltimore Symphony, North Carolina Symphony, Louisville Orchestra and Tucson Symphony and Dayton Philharmonic. He has also worked with Randy Newman, Wayne Shorter and the American Brass Quintet. He is the Associate Professor of Trombone at Eastern Kentucky University.