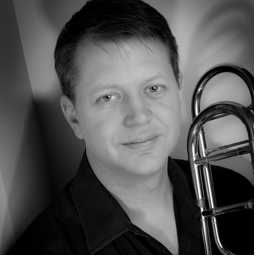 Colin Williams serves as the Associate Principal Trombonist of the New York Philharmonic, an appointment he’s held since 2014. Prior to this appointment, he served as the Principal Trombonist with the Atlanta Symphony Orchestra for twelve seasons and with the San Antonio Symphony for three seasons. Mr. Williams’s warm personality, technical prowess, and musical sensitivity have made him a welcome addition in performances by the Chicago Symphony Orchestra, the Boston Symphony Orchestra, the Boston Pops, the Philadelphia Orchestra, the Los Angeles Philharmonic, the National Symphony Orchestra, the Houston Symphony, the New York City Ballet, and the Ft. Worth Symphony Orchestra. Mr. Williams is not only a passionate performer and versatile educator – he’s also an advocate for musician’s wellness. During his tenure with the Atlanta Symphony Orchestra, he experienced a severe injury to his lip muscle, diagnosed as a tear in the orbicularis oris. This injury took him out of his performing career for nearly an entire season and resulted in years of lingering pain. This journey through injury, recovery, and mental health shapes his unique approach to teaching and playing the trombone. In 2018, Mr. Williams released his debut solo album Ash, embracing the crisis of injury and identity alongside his determination to return to the stage, to provide for his loved ones, and to transcend the barriers of language through music. Mr. Williams can be heard on the album Roadwork by the Atlanta Trombone Project, which was comprised of himself and then-members of the Atlanta Symphony Orchestra – Bill Thomas and George Curran – and was produced by Dr. Bradley Palmer of Columbus State University. This project would serve as the impetus for the first Southeast Trombone Symposium in 2010, which has since become an internationally acclaimed workshop and festival for hundreds trombonists of all ages. Artists of the STS would later release their ensemble album Legacy in 2016. Mr. Williams made his professional solo debut performing Arthur Pryor’s Blue Bells of Scotland in 2001. Since then, he has appeared as a soloist with the Atlanta Symphony Orcestra, the Pershing’s Own United States Army Band, the United States Military Academy Band, the Georgia Brass Band, the Atlanta Wind Ensemble, the Juilliard Orchestra, and the James Madison University Brass Band. He has also made solo appearances at the American Trombone Workshop and at the International Trombone Festival. An avid chamber performer, Mr. Williams has participated in the Amelia Island Chamber Festival, the Grand Teton Music Festival, and in the Saito Kinen Festival Orchestra under Seiji Ozawa in Matsumoto, Japan. He has also appeared with the Chicago Chamber Musicians. Mr. Williams’s teachers include Mr. Douglas Wright of the Minnesota Orchestra, Mr. David Finlayson of the New York Philharmonic, and Mr. Joseph Alessi, Principal Trombonist of the New York Philharmonic. He currently resides in River Edge, New Jersey with his wife Nikki Abissi – trombonist, educator, and founder of Extendabone – along with their sons Christopher and Alex.

Colin is speaking at

The Southeast Trombone Symposium Professors Choir was founded by Dr. Bradley Palmer at the inaugural STS in 2010. The membership includes current and former STS faculty, along with a number of artist-teachers from around the country. The group performed at the 2013 and 2018 International Trombone Festivals, and is proud to be featured for the 50th anniversary edition of the ITF in partnership with the STS in 2021. The ensemble is featured on the Artists of the Southeast Trombone Symposium CD recording "Legacy" and can be seen on the STS YouTube channel.

The Composers Workshop is a special program at the ITF, the mission of which is to encourage the composition and performance of new works for trombone at the ITF, as well as to support the development of the composers who create music for our instrument.  Works were chosen through an adjudicated application process.

This program features some of the composers who have been in residence this week (others can be heard on various programs throughout the ITF schedule).