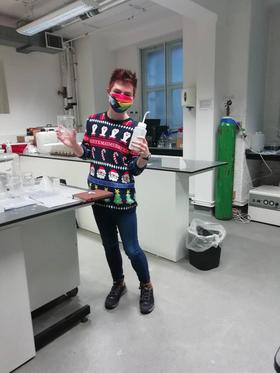 I'm interested in studying abrupt climate change during past interglacial periods. Interglacials are warm periods like today. We've been in a warm period for just over 10,000 years. The earth goes through warm-cold cycles, and during the Quaternary period the cold cycles have been significantly longer than the warm. These cycles are driven, in short, by our distance from the sun. The most similar time in the last 500,000 years to today in terms of solar forcing is a period 424,000 years ago that we call MIS 11. I study abrupt climate change in this period to look at these events under similar scenarios. MIS 11 is also a time where Greenland has lost much of its ice sheet. As we are poised to see Greenland retreat in the coming decades, understanding what this does to the earth system is important. I do this at Royal Holloway and University College London, whilst maintaining a part time career at LUSH to add a bit of sparkle to life.

Daniel is speaking at

Past Life and Environments
September 9, 2021

Abstracts for each presentation are below and the feedback link. Please take the time to fill out the form. Your feedback will be used to identify the best poster and best oral presentation as well as providing valuable comments for the presenters.

Sloths (Xenarthra, Folivora) were one of the dominant mammalian groups in Southern and Central America until the early Holocene. Folivora used to have a large range of body sizes, locomotion and ecology, while extant sloths are morphologically and ecologically similar. Research into the molecular evolution and biology of sloths, previously limited to extant species, has started to leverage information contained in the large recent fossil record of this group through ancient DNA methods.

Cueva del Milodón (Ultima Esperanza, Chile) is renowned for its exceptionally preserved faunal record. Remains of Darwin’s ground sloth (Mylodon darwinii) are found there from the end of the last Ice Age to their extinction in the early Holocene.

The mitochondrial diversity was low, yet higher than that found in another megaherbivore population, sampled near its extinction: Holocene woolly mammoths (Mammuthus primigenius) from Wrangel Island. Nuclear diversity in the two higher coverage genomes will reveal whether low diversity is also found in the nuclear genome.

These findings, combined with direct radiocarbon dates, will be used to reconstruct the demographic history of the species, and to test models for their extinction, hoping to better understand why these sloths became extinct, while extant sloths persisted.


9:15 Daniel Parkes: Investigating the cause and structure of abrupt climate change events during MIS 11c

Throughout the last 2.6 million years the earth’s climate has oscillated between cold and warm phases, known as glacial-interglacial cycles, as a result of orbital forcing. To better understand climatic responses, it is necessary to look at interglacial periods with similar orbital parameters to today. Of these, Marine Oxygen Isotope Stage (MIS) 11 (~424,000 years ago) is of growing importance as; 1) an orbital analogue to the present day; and 2) a time of significant Greenland Ice Sheet (GIS) loss. Freshwater influx as a result of GIS melt is thought to induce climatic instability in the northern hemisphere by disrupting ocean circulation, which normally brings warm water to the higher latitudes. This is hypothesised to be the cause of a cooling event known as “The Non-Arboreal Pollen Phase” in MIS 11c, which is recorded in sediments across Europe, though the mechanism of this event is not well understood. Presently, there are a number of cores that indicate reduction in sea surface temperature in the early stages of MIS 11c, seemingly concurrent with this event, though no deep-water connection has yet been found. This PhD project aims to investigate this further by (1) producing high-resolution temperature and aridity records for palaeolake basin(s) that record the event (2) investigating this event in multiple marine sites across the North Atlantic (3) establishing the driving factors responsible for this event.

The shape of river profiles reflects local tectonic processes and climate conditions. The stream power model, a family of equations based on river properties, is widely used by geologists and geomorphologists to learn about landscape development and the underlying conditions that shape it. One particularly important metric derived from the stream power laws is channel steepness index (ksn ), a proxy for uplift rate. Owing to the development of different solutions to the stream power laws, multiple approaches can be used to calculate ksn, however, each approach can produce different values. This is problematic. How can we compare values across studies that have used different approaches, how do we know which values are truly representative, and which approach is best?

We have evaluated several key approaches, assessing accuracy and bias with aid of an artificial river profile. Each approach is used to calculate ksn from the same artificial dataset, where the values of ksn are already known. A river profile is then reconstructed using the calculated ksn values, and the residuals between the reconstructed profile and the true profile are determined, offering some quantification of bias. Two of the best performing approaches were then tested on a real dataset from the Sierra Nevada, California. This mountain range has an interesting and debated uplift history, owing to it's unusual structure. It was found that an approach based on a linear inversion of river network data provides the most accurate results with high spatial resolution. Applying this approach to the southern Sierra Nevada two separate processes of uplift that operated in different parts of the study area are identified, improving on the resolution of previous geomorphic studies and the other approach in this study. Choice of methodology is therefore crucial to ensure we leverage as many signals from a dataset as possible.

Natural Networks: Connectivity and Inclusivity
Sep 8 - 10, 2021
Too hard to browse the agenda in your phone? Not to worry, we have a mobile app for you. Besides agenda viewing, you can also see who else is attending and talk with them ahead of time.