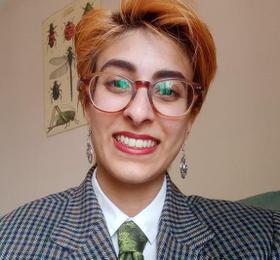 Hana is speaking at

Abstracts for each presentation are below and the feedback link. Please take the time to fill out the form. Your feedback will be used to identify the best poster and best oral presentation as well as providing valuable comments for the presenters.

Acute Oak Decline is a syndrome that has been decimating areas of oak dominated woodland in the UK for several decades. Diseased oaks present with a range of symptoms, most notably stem bleeds, alongside a reduced canopy. These stem bleeds are associated with a variety of enterobacteriaceae, with four key bacterial genera consistently found across diseased trees - Raoultella, Rahella, Brenneria, and Gibbsiella. The dispersal method of these bacteria associated with Acute Oak Decline is not yet fully understood, however properties of these bacteria suggest the role of a warm blooded animal vector such as birds. Birds such as great tits and blue tits are closely associated with oak trees, using them as nesting and feeding sites. Oak trees are an integral source of herbivores for both tit species, which utilise caterpillars as their primary food source for their nestlings during breeding season. This talk will delve into the methodology used to investigate the transmission of these bacteria between oak trees, and to examine what impact living and breeding in diseased woodlands have on the fitness of these birds.


12:45 Christopher Owen: Phylogenetic dating points to global spread of a wildlife pathogen over a century before disease detection

Globalization is a key contributor to the spread of infectious diseases which can often only be reconstructed by the phylogenetic analysis of genomic data. Time calibration of pathogen phylogenetic trees stands as a major pillar of phylodynamic methodologies, which in recent years have yielded vital insights on host-pathogen associations at different evolutionary scales. In this study, I characterised the historical origins and translocations of Ranavirus, amphibian pathogens of conservation concern, with a particular focus on characterising introductions of the FV3 lineage into the UK. To do so, I employed a phylodynamic approach using a dataset of 58 FV3-like ranavirus whole-genome sequences sampled globally to reconstruct their patterns of genetic diversity through time. I uncovered extensive human-mediated translocations of ranaviruses between North America and the UK dating back as early as the 19th century, preceding the first detection of amphibian ranaviral disease in the UK by nearly two centuries. Furthermore, population structure analysis by genetic marker clustering revealed haplotype signatures shared by viruses causing outbreaks in frog-farming facilities on different continents, suggesting an intercontinentally trade-linked network of viruses. This work exemplifies the risk animal trade poses in disease emergence of wildlife pathogens, both since the onset of globalization and in current times, which could only be revealed by genomic data in addition to standard epidemiological approaches.

13:00 Hana Merchant: Is there a signal in mammalian basal metabolic rate associated with a fossorial lifestyle?
Basal metabolic rate (BMR) – the rate of energy use needed to perform basic, life-sustaining functions – is a universal measure of metabolic rate allowing for comparisons of energy expenditure between species. Many animals inhabit a vast array of challenging environments, an example being living in confined spaces where oxygen levels are likely to be low. Previously it has been shown that species can exhibit both geno- and phenotypic adaptations in metabolic rate to exploit such unique niches. Living for extended periods of time within an enclosed space – in a burrow, den or crevice – will likely require certain physiological and morphological adaptations, and thus influence the biology of the species that occupy them. In this study we are taking a global look at the mammalian kingdom to understand the relationship between BMR and burrow use (fossoriality) in mammals. In particular, we aimed to determine if there was a trait within BMR associated with fossoriality, versus species which live above ground. We used pre-existing data for mammalian BMR and body mass, and 24-life history traits, controlling for any phylogenetic trends through a phylogenetic mixed model (PMM). The preliminary results for this study suggest there are no significant differences in BMR between species that are terrestrial, fossorial or entirely subterranean. Additionally, flying mammals show no significant difference in their BMR to the other respective groups, and aquatic mammals had a significantly higher BMR compared to all other mammals. This suggests aquatic mammals are the only group to have a uniquely high metabolic demand associated with their lifestyle, likely a result of their size and need to maintain their body temperature in cold waters. Furthermore, these results infer that there is no basal metabolic trace associated with fossoriality, and thus subterranean species are not paying a basal metabolic cost as a result of this lifestyle.


13:15 Lily Peck: Wake up and smell the coffee: Fifty years of emergence and divergence of Fusarium coffee wilt disease

Background: Nearly 50% of crop yields are lost to pests and disease, with plants and pathogens locked in an amplified co-evolutionary process of disease outbreaks. Coffee wilt disease, caused by Fusarium xylarioides, decimated coffee production in west and central Africa following its initial outbreak in the 1920s. After successful management, it later re-emerged and by the 2000s comprised two separate epidemics on arabica coffee in Ethiopia and robusta coffee in east and central Africa.
Results: Here, we use genome sequencing of six historical culture collection strains spanning 52 years to identify the evolutionary processes behind these repeated outbreaks. We show that the robusta coffee population arose from the initial outbreak, whilst the arabica coffee population is different and an evolutionary “sister” group to the other strains. A screen for putative effector genes involved in infection shows that the populations have diverged mainly by traditional evolutionary vertical processes. However, 15 putative effector genes show evidence of horizontal acquisition, being highly similar to genes from F. oxysporum, a closely related and devastating plant pathogen infecting over 120 different crop species. These findings support a working hypothesis that the arabica and robusta populations partly acquired distinct effector genes via horizontal transfer from F. oxysporum, which shares coffee as a host and lives on other plants intercropped with coffee.
Conclusion: Our results show how historical genomics can help reveal mechanisms that allow fungal pathogens to keep pace with our efforts to resist them. Our list of putative effector genes identifies possible future targets for fungal control. In turn, knowledge of horizontal transfer mechanisms and possible donor taxa might help to design future farming strategies that minimize the risk of transfer of effector genes between closely-related Fusarium species.

Natural Networks: Connectivity and Inclusivity
Sep 8 - 10, 2021
Too hard to browse the agenda in your phone? Not to worry, we have a mobile app for you. Besides agenda viewing, you can also see who else is attending and talk with them ahead of time.