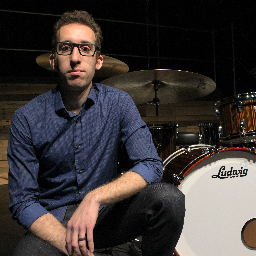 Nick Costa is a Music Educator for the School District of Philadelphia, a Master Lecturer at the University of the Arts, a percussion consultant for Villanova University, and a National Board for Professional Teaching Standards (NBPTS) candidate. He is also an independent drummer, clinician, and drum technician with both national and international touring experience. As an educator, Nick has focused on providing ways to integrate drum set studies into K-12 Music curriculum to bridge the gap between general and instrumental music studies. He has also played a pivotal role in integrating “Modern Band” curriculum for the School District of Philadelphia by creating relationships with Conn-Selmer, Zildjian Cymbals, Vic Firth Sticks, Remo Heads, The Recording Academy (Grammy’s), and Little Kids Rock to outsource all 220 schools with drum sets. Nick has also written and recorded lessons for Modern Drummer Magazine. As a performer, Nick is actively performing around the Philadelphia region with various groups ranging from rock, to jazz trios and big bands, to being a first call musician for local theater groups and schools for their annual musicals. Nick was also a candidate for the Mamma Mia and Green Day’s American Idiot National Broadway Tours, and currently works as a session musician recording, engineering, and mixing drum tracks for various artists from Shane Henderson (Valencia) to Mahana (Iranian Pop Artist on Navahang Records). Besides performing throughout the greater Philadelphia area, Nick is also teaching privately, has facilitated workshops teaching underprivileged kids music, and has been praised by numerous producers including Mike Watts (The Dear Hunter, Story of the Year) Steve Haigler (Brand New’s Deja Entendu, Fuel’s Sunburn, The Pixies), Jason Elgin (Collective Soul, Terrible Things), Fred Mascherino (Ex Taking Back Sunday), John Naclerio (Brand New, My Chemical Romance) and Eric Plesha (Cobra Starship, Valencia) for his consistency and energy while recording. Nick is an educational artist for Ludwig/Musser Percussion, Vic Firth, Zildjian, Remo drumheads, and Roland.

From general to instrumental music, rhythmic studies are one of the main components in music education. This workshop will show you how to integrate drum set studies into your classroom to keep students engaged and ...

The PMEA Summer Conference 2021
Jul 21 - 23, 2021
Too hard to browse the agenda in your phone? Not to worry, we have a mobile app for you. Besides agenda viewing, you can also see who else is attending and talk with them ahead of time.