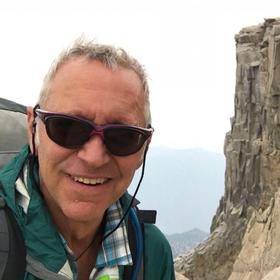 Michael Kodas is a Pulitzer Prize-winning photojournalist and author as well as the former Deputy Director of the Center for Environmental Journalism at the University of Colorado Boulder. He was the winner of the 2018 Colorado Book Award for General Nonfiction for his book, Megafire: The Race to Extinguish a Deadly Epidemic of Flame, which was also named one of the 20 best nonfiction books of 2017 by Amazon. He is also the author of High Crimes: The Fate of Everest in an Age of Greed, which was named Best Non-Fiction in USA Book News’ National Best Books Awards of 2008 and was the subject of a question on the game show Jeopardy. His photography was featured in the Ken Burns/Lynn Novick documentary The Vietnam War and he has appeared on the HBO program Last Week Tonight with John Oliver; in the American Experience documentary The Big Burn on PBS, in the Emmy Award-winning documentary The Fire Line and in numerous other films, television and radio programs. Kodas’s writing, investigations and photojournalism focus on a wide range of environmental issues including wildfire and other environmental hazards, deforestation, climate change, fisheries, energy, development and endangered species. He has worked in more than 20 countries and his assignments have taken him to mine fields in Vietnam, the high camps of Mount Everest, the jungles of Borneo, the Oval Office of the White House, the northernmost permanent settlement in the Arctic and research stations in Antarctica. His work has appeared in the New York Times, The Washington Post, The Los Angeles Times, The Chicago Tribune, The Boston Globe, The Denver Post, National Public Radio, The PBS Newshour, Newsweek, the CBS Evening News, National Geographic News, Mother Jones, Outside magazine, OnEarth, bioGraphic, ENSIA and many other publications around the world. He was part of the team at The Hartford Courant awarded The Pulitzer Prize for breaking news coverage in 1999 and has been honored with awards from the Pictures of Year International competition, the Society of Professional Journalists, the Lowell Thomas Travel Journalism Competition, the National Press Photographers Association and many other professional organizations. As an instructor at the University of Colorado Boulder he created the College of Media, Communication and Information’s acclaimed Media Technology Bootcamp for graduate journalism students and also taught Newsgathering and Multimedia Storytelling, Reporting on the Environment, Science Writing, Photojournalism and numerous other journalism classes to both graduate and undergraduate students. From 2013 to 2019 Kodas was one of the directors of the prestigious Ted Scripps Fellowships in Environmental Journalism, which brings five mid-career journalists focused on environmental topics to the University of Colorado Boulder to work on a project and study at the university for an academic year. Kodas was a Ted Scripps Fellow in Environmental Journalism at the University of Colorado in 2009 and 2010, a Davidoff Scholar in the Wesleyan Writers Workshop at Wesleyan University in 2005 and is a graduate of the University of Missouri’s School of Journalism.

Michael is speaking at

The past year has seen the biggest, the deadliest and the costliest wildfires on record. These extremes stem from numerous factors, including a warmer climate, forest management trends and more people living in harm’s way. Wildfire has gone from having something of a season, to plaguing the nation year-round, and none of these conditions are likely to change soon. Considering its broad and cascading impacts, it’s likely environmental reporters will find more than one occasion to include wildfire in their work. This tour will travel through forests and burned areas above Fort Collins to provide a comprehensive look at fire in Colorado. Participants will learn about its history, wildland firefighting, climate change and fire weather, community resilience and human behavior in fire, fire management at the local and national level, and post-fire impacts such as debris flows and invasive species encroachment. We’re going to get down and dirty in the Wildland-Urban Interface, so bring your backpacks, hiking boots and enough energy to complete an easy to mid-level hike. Total drive time: 3.5 hours. Good for those looking for some exercise.

SEJ's Fund for Environmental Journalism will award grants up to $5,000 in January 2020 for story projects covering U.S. public lands. Share your ideas with our panel of judges, and get feedback and tips to strengthen your proposal for FEJ Winter Competition. Deadline for the story grant proposals is November 15. Note: This session will not be recorded. Story grants made possible by The Wilderness Society, The Pew Charitable Trusts and other foundation and individual donors to FEJ.

LAND AND CONSERVATION: The Wildfire Crisis: Can We Log (or Graze, Thin, Burn, Zone or Rake) Our Way Out of This?
October 12, 2019

After each fire season in which the destruction and death tolls of catastrophic wildfires increase, news media hear of various simple fixes to reduce the combustibility of increasingly flammable forests and wildlands. Most of those easy solutions prove ineffective at slowing the increasing size and destructiveness of wildfires and some of them, when inappropriately implemented, have actually increased the damage done by wildland fires or had other, unintended negative consequences. What techniques work to reduce the losses of life and property to wildfires? Which ones are overrated or misused? What is effective at minimizing the impacts of wildfires on our health, climate and natural resources?


Join us for a full breakfast and a discussion with Western authors at the Denver Botanic Gardens, a 24-acre urban oasis with nearly 50 curated gardens, a tropical conservatory, education programs and art exhibitions. The Gardens' horticulturalists and scientists work on local and global research projects related to plant and water conservation, climate change and biodiversity. Following the breakfast program, attendees can explore the Gardens and learn about various scientific research projects.

The Rocky Mountains provide the perfect backdrop for a discussion by authors who bring a sense of adventure and exploration to their books on critical environmental topics. Whether reporting on Western water issues from a pack raft, researching conservation at the Earth’s poles, exploring the world’s hotspots of air pollution, dumpster diving for aluminum cans or even jumping into fiction, these authors value seeing things for themselves.

Moderator: Michael Kodas, Freelance Reporter, Photojournalist, Educator and Author, “Megafire: The Race to Extinguish a Deadly Epidemic of Flame” and “High Crimes: The Fate of Everest in an Age of Greed”

Speakers:
Joel Berger, Professor and Barbara Cox Anthony University Chair in Wildlife Conservation, Department of FWC Biology, Colorado State University; Senior Scientist, Wildlife Conservation Society; and Author, “Extreme Conservation: Life at the Edges of the World” and “The Better to Eat You With: Fear in the Animal World”
Beth Gardiner, Journalist and Author, “Choked: Life and Breath in the Age of Air Pollution"
Heather Hansman, Freelance Writer, Editor, Raft Guide and Author, "Downriver: Into the Future of Water in the West"
Laura Pritchett, Author, "The Blue Hour" and "Stars Go Blue" and several other books

11:00 a.m.-Noon   Garden Tours
Following the authors' program, two Denver Botanic Gardens horticulturalists will lead tours and discussions about the institution's longtime global research projects and the unique Steppe Garden. There will be two tours capped at 20 people each, so act fast and sign up on-site upon arrival at the Garden. Otherwise, the Gardens will be open to exploration until buses leave promptly at noon for the airport and hotels.

Departure: One bus will stage at each conference hotel — Hilton Fort Collins, Fort Collins Marriott and the Candlewood Suites — beginning about 7:30 a.m. for departure promptly at 8:00 a.m. Attendees not staying at one of these hotels who have preregistered for the Sunday program can board at any one of these hotels.

These buses will then become the airport buses that depart the Gardens at noon for arrival at Denver International Airport no later than 1:00 p.m. All buses will then return to Fort Collins hotels.

Noon: Conference ends and shuttles take attendees back to Fort Collins or to Denver International Airport, with airport arrival no later than 1:00 p.m.