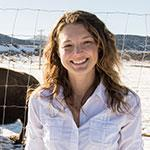 Jennifer is speaking at

Tour 9. Wildlife Restoration on the Prairies: Ferreting Out a Solution
October 10, 2019

In 1981, a small population of black-footed ferrets, which scientists had believed were extinct, was discovered on a Wyoming ranch. Biologists captured 24 of the secretive mammals and brought them into captivity, reasoning that captive breeding was the species’ only hope of survival. Today, hundreds of black-footed ferrets, a keystone species, call the Great Plains home — all descendants of that Wyoming population. On this field trip, we’ll visit the Soapstone Prairie, a site where ferrets have been successfully re-introduced into the wild and where bison — another iconic plains species — have seen a resurgence of their own. A genetically pure herd of “Yellowstone” bison, also created through captive breeding, was released at Soapstone in 2015. We’ll tour the bison enclosure and hear from experts about the challenges — disease, genetics, habitat — that scientists faced in their efforts to restore both species. In the afternoon, half of the group will stay at Soapstone for a hike, which will feature an 11,000-year-old archaeological site and plenty of opportunities to spot pronghorn antelope. The other half will tour the nearby Black-footed Ferret Conservation Center, which is run by the U.S. Fish and Wildlife Service and houses two-thirds of the world’s captive black-footed ferrets. The ferret center tour is capped at 24. Sign up online for the center (Tour 9A) or the hike (Tour 9B). Total drive time: 2 hours. Good for those looking for some exercise.