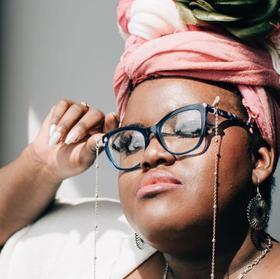 Buffy graduated with vis Master’s in Higher Education from the University of Denver (DU) in 2015. Vis concentration in the program was Diversity in Higher Education, reflecting vis desire to support historically marginalized communities in their educational endeavors. Buffy is also dedicated to educating the general public about members of marginalized communities who are often left out of vitally important aspects of the community at large. Vis love of education, passion for social justice, and skills in grassroots organizing traveled back with ver when ve returned home to Iowa where ve co-founded and currently co-chairs the Iowa Queer Communities of Color Coalition and sits on the boards of the Iowa Coalition for Collective Change and the Central Iowa Center for Independent Living. Ve is also a developer of the #BlackEmergencyIA initiative which was created in response to a recent rise in instances of anti-black violence in the state. The initiative’s focus is the safety of black folks in Iowa. Ve was the recipient of the Inaugural Iowa LGBTQIA Leadership Award and recognized by U.S. Representative Cindy Axne as Iowan of the Week in 2020. While at DU, Buffy focused vis scholarly efforts on college students who are on the Autism Spectrum with an emphasis on intersectionality. Vis work also centered on issues related to the LGBTQIA community and people of color. Ve received vis BA in World Languages and Cultures/Spanish from Iowa State University (ISU). Buffy’s past leadership roles include serving as president of DU’s Black Graduate Student Association, DU’s NASPA Graduate Student Associate, Inclusive Excellence Fellow at DU’s Center for Multicultural Excellence, host committee member for the disability hospitality suite of the 2015 National LGBTQ Task Force Creating Change Conference, president of ISU’s LGBTA Alliance, National Conference on Race and Ethnicity scholar, volunteer coordinator of the 2012 Midwest Bisexual Lesbian Gay Transgender Ally College Conference, and co-founder of ISU’s Gamma Rho Lambda Omicron chapter. Serving in these roles inspired ver to be a fervent advocate for each of vis communities.