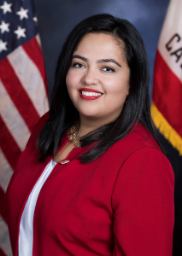 Wendy Carrillo was elected to serve in the California State Assembly in December 2017. She represents the 51st Assembly District which is home to close to 500,000 residents in the City of Los Angeles, unincorporated East Los Angeles and includes some of the most historic and iconic communities in the city. Prior to being elected to office, Assemblywoman Carrillo was a broadcast journalist for twelve years covering human rights, global conflict and US politics. Additionally, she worked in communications for the Service Employee International Union United Long Term Care Workers, which represents over 350,000 Home healthcare workers in California and served in local government as a communications deputy for a member of the Los Angeles City Council. She has been an advocate for education, immigration reform, environmental justice, healthcare for all, job creation and innovation. In the State Assembly she serves on the Appropriations, Rules, Public Safety, Health and Water, Parks and Wildlife committees. Assemblywoman Carrillo immigrated to the United States as a young child during El Salvador’s Civil War and is a first generation American with Salvadoran and Mexican heritage. She is the eldest of five daughters and received a Bachelors of Arts in Communications from California State University Los Angeles and a Masters in Journalism and Political Science from the University of Southern California.