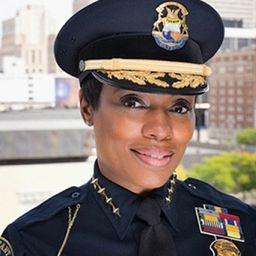 Lashinda T. Stair is a proven dynamic leader with the ability to deliver results in high-pressure situations. As a 23-year veteran of the Detroit Police Department, she has held the rank of Police Officer, Sergeant, Lieutenant, Inspector and Deputy Chief. In March 2014, under the leadership of Chief James E. Craig, Deputy Chief Stair made history when she became the first member of the Detroit Police Department to be appointed to the rank of 1st Assistant Chief. During her tenure with the Detroit Police Department, 1st Assistant Chief Stair has held assignments at the First Precinct, Psychological Services, the Equal Employment Opportunity Office (EEO), the Human Resources Bureau, the Central District, the Training Center, the Support Services Bureau, the Neighborhood Policing Bureau and the Office of the Chief of Police. Lashinda T. Stair is a loving wife, devoted mother of two phenomenal children and a graduate of Detroit Public School’s Cass Technical High School. She is currently enrolled in the MBA Program at Wayne State University and holds a Master’s Business Certificate from the Mike Ilitch School of Business, a Master of Science in Liberal Studies, with a concentration in Police Administration from Eastern Michigan University and a Bachelor of Arts in Sociology, with a minor in Psychology, from Wayne State University. 1st Assistant Chief Stair is a graduate of the Detroit Regional Chamber’s 39th Leadership Detroit Class, the F.B.I National Executive Institute (FBINEIA), and the Senior Management Institute of Police (SMIP). She is also, a graduate of the Eastern Michigan University School of Police Staff and Command, and is skilled in a variety of specialized training including, but not limited to: the U.S. Equal Employment Opportunity Commission, Michigan Department of Civil Rights on Investigating Complaints of Harassment and Discrimination, the U.S. Department of Justice Community Policing and Problem Solving and the U.S. Department of Justice Empowerment Zone Processing. 1st Assistant Chief Stair is a member of the Wayne State Alumni Association, the Liberal Arts and Sciences Association, the National Organization of Black Law Enforcement Executives and the International Association of Chiefs of Police. In addition, 1st Assistant Chief Stair sits on the Board of Commissioners for the Detroit Crime Commission, the Board of Directors for Crime Stoppers of Michigan, the Board of Directors for the Detroit Police Benefit and Protective Association, the Board of Directors for the National Council on Alcoholism and Drug Dependence-Greater Detroit Area, the Detroit Public Safety Foundation and former Board of member for Girls for Global Growth, a non-profit mentoring organization in Detroit. She is the recipient of the Board of Police Commissioners Resolution for Outstanding Leadership and various other awards, citations and letters of commendation. Lashinda was named by FORBES Magazine one of the 2017 “Forty over Forty Women to Watch” and will be featured in i.Detroit, a photographic project which tells the stories and ancestral DNA of 100 extraordinary Detroiters. She has been named Role Model of the Year, by Alternatives for Girls (AFG), and recently received the Distinguished Leadership Award from the Boy Scouts of America's Workforce Development Exploring Program.