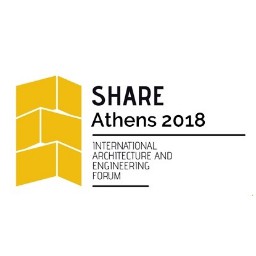 SHARE Athens 2018, International Architecture and Engineering Forum will take place on 27th November and brings together principal and senior architects from leading practices to discuss and gain inspiration from each other.

The lectures are concentrated on present and future, innovation in architecture and engineering, on explorations of new materials and technologies for designing a smart and sustainable built environment.

SHARE Athens 2018 act as an effective platform for networking, business, inspiration, and exchange of ideas and transfer of know-how. 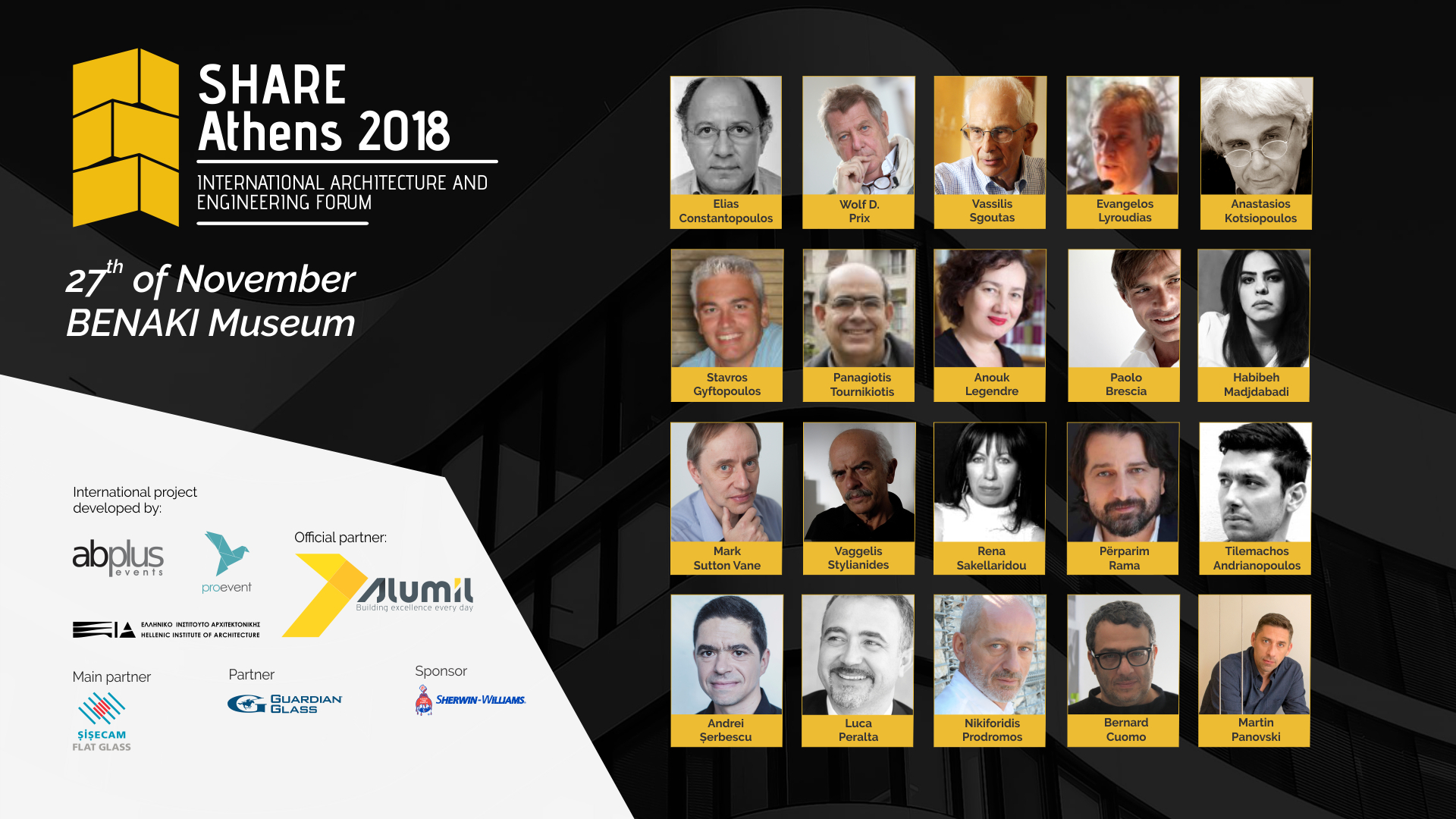 The event will gather a series of outstanding speakers from 9 countries: Greece, Germany, Iran, United Kingdom, Italy, France, The Netherlands, Bulgaria, and Romania, to celebrate architectural excellence through their most recent internationally acclaimed projects.

Wolf D. Prix received numerous awards including the Great Austrian State Award and the Austrian Decoration of Honor for Science and Art. He is permanent member of the Austrian Art Senate and the European Academy of Sciences and Arts as well as chairman of the Curia for Art since autumn 2014.

Two Universities have conferred him the Doctorate Honoris Causa: The Universidad de Palermo, Buenos Aires, Argentina (2001) and the "Ion Mincu" University of Architecture and Urbanism, Bucharest, Romania (2014). In 2015 he was awarded an Honorary Diploma of the Architectural Association of London.

Numerous awards in competitions. Two of the 30 Ministry of Public Works ex-aequo prizes for the best-implemented buildings in Greece and one of 9 ex-aequo awards for innovative housing. Has participated in several activities of the International Union of Architects and was its President between 1999 - 2002. The triennial "Vassilis Sgoutas Prize" was launched by the UIA in 2007.

Honorary Member of the architects' institutes of Australia, China, Japan, Kazakhstan, Korea, Mexico, Panama, Philippines, Russia, South Africa, USA and Foreign Member of the State Russian Academy of Architecture and Construction Sciences. Has been awarded the medal of the Magnesia Chapter of the Technical Chamber of Greece for his "lifelong contribution to architecture"

Përparim RAMA, CEO and Founding Director of 4M GROUP, is an award-winning Architect and Conceptual Artist. His distinctly integrated approach and passion for architecture has been presented in numerous media publications: London Building Design Magazine, BBC, CNN, Bloomberg, RAI, The Times Newspaper, The Western Australian and his project works are visible in more them 20 countries around the globe. Rama has won multiple awards with 4M GROUP and personally.

arch. Anouk LEGENDRE  -  Co-Founder Architect XTU. XTU is an architecture and urban planning agency founded by Nicolas Desmazières and Anouk Legendre, , the XTU agency has many innovative, often award-winning projects that seek a strong inscription in the territory. Among its remarkable achievements is the Jeongok Prehistory Museum in South Korea (prize of the Korean Academy of Architecture), the French pavilion of the Milano 2015 World Fair (Best Architecture Pavilion), Cite du Vin in Bordeaux (2016).

For many years Luca Peralta has worked as a designer and consultant on important award-winning projects such as the MAXXI - National Museum of Arts of XXI Century in Rome, Italy and Betile – Mediterranean Museum of Cagliari, Italy; in both cases as a member of Zaha Hadid's design team (Pritzler Prize 2004).  He also worked on the Convention Center EUR in Rome, Italy as a member of Massimiliano Fuksas Architetto's design team, the Camarillo Campus Master Plan for UCLA University of California with Norman Foster & Partners (Pritzler Prize 1999), Giorgio Armani's flagship store on Brompton Road in London, UK as site supervisor, several Prada Fashion Stores around the world as a design consultant.

arch. Andrei SERBESCU - Founder ADN Office of Architecture, ADNBA was established in 2003 in Bucharest, by Andrei Șerbescu and Adrian Untaru, later joined by Bogdan Brădățeanu. the neighborhoods and their stories are what interests us most 2017, Prize of the Bucharest Architecture Annual  2016, Prize of the Romanian Building Awards  2016, Prize of the East Centric Architecture Triennale Award  2015, Milan Zlokovic Award for best architectural achievement in the Balkan Region.

arch. Tilemachos ANDRIANOPOULOS - Director of TENSE ARCHITECTURE NETWORK. Born in Athens (1974), Diploma in Architecture, National Technical University of Athens (2001), Metropolis Msc in Architecture and Urban Culture, CCCB- Universitat Politècnica de Catalunya (2006). Founder of Tense Architecture Network_TAN (2004). The practice’s work includes several first prize competition proposals as well as awarded residences: ‘Residence in Megara’ and ‘Residence in Heraklion’ were nominated for the Mies van der Rohe award (2015-2017) and ‘Residence in Sikamino’ was shortlisted for the same award (2013), while TAN participated in the Architecture Biennale of Venice twice (2012 and 2014). Assistant Professor in the School of Architecture of the National Technical University of Athens.

arch. Vaggelis STYLIANIDES - Partner 3SK STYLIANIDES ARCHITECTS, He studied architecture at the National Technical University of Athens, graduating in 1975. Between 1975 and 1977, he continued his studies in Paris where he completed postgraduate courses Urbanism at Sorbonne and Geography at the CRU (Centre de Recherches d’Urbanism). He returned to Athens in 1978 to collaborate with Antonis Stylianidis.

arch. Nikos KTENÀS - Partner NIKOS KTENAS ARCHITECTURE, He was born in Piraeus, Greece in 1960. From 1977 to 1979, he attends various courses in Mathematics, Physics, Music Theory and Architecture at Columbia University, New York, at Syracuse University, Syracuse, New York, at The Cooper Union, NY and at the AIFS/ University of London, London. From 1979 to 1983 he studies architecture at the Dept. of Architecture, Art and Planning of Cornell University, Ithaca, New York, where in 1983 he obtains his Professional Degree in Architecture.

The SHARE Forum is expanded online through the communication platform between participants for 6 months.

The common languages of the conference are Greek and English. Simultaneous interpretation will be provided.

The participation package includes:
1. Access to SHARE Athens 2018;
2. Business Networking Opportunity;
3. Acces to Whova Application - SHARE Networking App, which allows: creating an individual profile page, communication with other attendees and speakers, navigate the event agenda, networking (a month before and during the event);
4. Participation Certificate;
5. The event portfolio (it contains all the materials of the conference);

We are excited to use Whova as our event platform. Attendees please download Whova event app.

Powered by Whova Agenda Center
Update once, sync up everywhere

Powered by Whova Speaker Center
Update once, sync up everywhere

We are excited to use Whova as our event platform. Attendees please download Whova event app, to access the documents and handouts shared by the organizers.

Powered by Whova Exhibitor Center
Update once, sync up everywhere

Powered by Whova Sponsor Center
Update once, sync up everywhere