Picture this: You’re at a conference, grabbing lunch in between sessions, and sitting next to a random stranger. The two of you strike up a conversation and find you have a lot more in common than you thought! You make plans to meet up later during the event, with the sense that this might turn into a business connection that lasts for years to come.

While a situation like this might feel like a relic of a past, pre-COVID era, it doesn’t have to be. Sure, some of the details might be different, but this type of natural, meaningful networking is still completely possible with Whova’s Speed Networking. Whova’s newest release, Speed Networking places attendees who join the session at a virtual table with a small group of other attendees on video chat. Whether you’re creating networking opportunities for a virtual event, connecting remote attendees at a hybrid event, or giving attendees the opportunities to talk virtually before they meet in person, Speed Networking can break the ice and begin connections that can carry on during and after the rest of the event.

Missing the casual, personal experience of striking up a conversation with someone new? Valuable networking opportunities at in-person events can often pop up in surprisingly informal settings, be it the convention center hallways or the buffet line.

While you can’t just bump into someone outside of a session anymore, a little planning can still give attendees those sudden moments of connection that can turn into meaningful business relationships. Speed Networking places attendees in shuffling video chats of 2-4 attendees, combining the casual feeling of spontaneously chatting with a few interesting strangers and the heightened engagement of face-to-face connection within a virtual setting.

Meet as many people as possible with table shuffling

Customize table size and session length to suit your event

Whether you want a casual social event with 15-minute conversations, fast-paced one-on-one talks, or a longer session with larger groups, Speed Networking can naturally accommodate a wide variety of uses.

Whova allows organizers to not only choose session lengths before reshuffling but the size of the table from pairings of only two people to tables of up to four. Depending on what organizers want out of Speed Networking, they can easily customize the session to fit their needs.

Create exclusive sessions as a perk for VIP attendees

While networking sessions can be open to all attendees, when setting up a Speed Networking session you can also choose to limit attendance to a specific type of attendee, ticket type, or manually add attendees to each session.

This gives you some flexibility in who the networking sessions will be for! For instance,  if you have groups of attendees in different fields, you could host specific sessions for the different groups.  You can also use Speed Networking as a perk for VIP attendees. If your event has higher-tiered tickets, try scheduling small, exclusive networking sessions as a premium opportunity for high-level attendees.

Send out automatic invitations and reminders

We know event organizers already have a lot on their plate, so you can automate the more tedious work by having Whova send out the invitations and reminders for Speed Networking sessions automatically. Just customize the pre-written email template, and you can easily send out invitations to attendees and schedule a reminder. 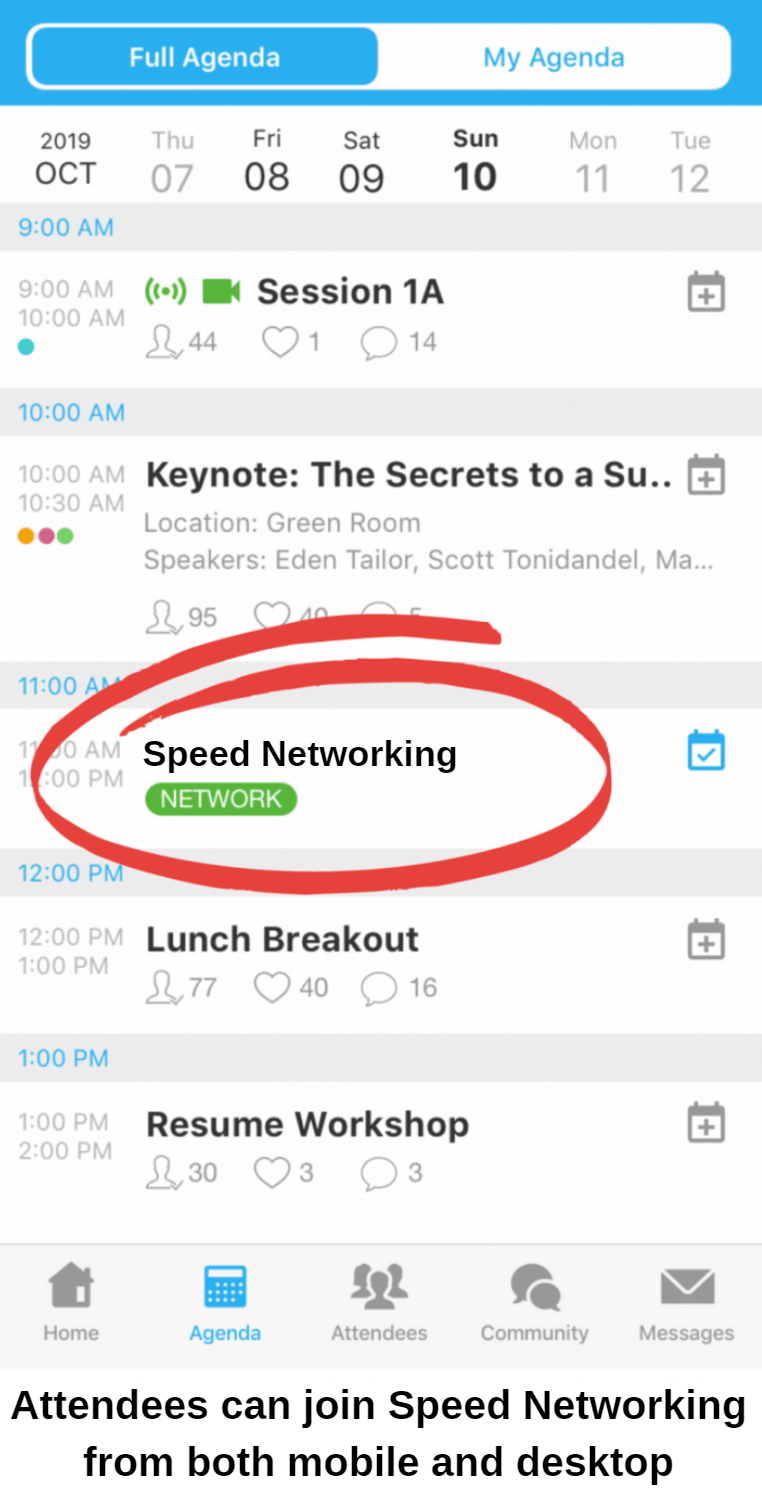 Seamless integration with the rest of the event platform

Networking directly through the Whova app can make connecting with attendees even easier. Attendees can find Speed Networking sessions directly within Whova’s event agenda and add them to their personal agenda to keep all their information together and be sure not to miss it.

Not only is it easy to use and helps attendees avoid getting things mixed up or wasting time switching between platforms, but it can also help them connect with the people they meet through other Whova networking tools, such as clicking on their attendee profile and shooting them a message.

Easy navigation on both desktop and mobile

Speed Networking is designed to be intuitive to use, and it only takes a few clicks for attendees to join the conversation. When an attendee wants to join in on a session, all they have to do is click “Grab a Seat” and they’ll automatically be placed with a group of other attendees.

Speed Networking is even accessible through both mobile and desktop, allowing users to get to know each other whether they’re sitting at their desk or using their cellphone on the go.

For more than just virtual events

While Speed Networking can be an excellent way of connecting attendees at virtual events, their utility doesn’t have to stop there. As more events start shifting to a hybrid format, Speed Networking allows remote attendees to join in on the fun even if they don’t get to be there in person. Even if the event is held in-person, organizers can also choose to schedule Speed Networking sessions before the event begins so attendees can start making connections early, or even schedule them after the event is over to keep networking opportunities going.

With the right tools at your disposal, networking remotely can be easy. Speed Networking creates opportunities to socialize that are just as enjoyable as they are useful.

Interested in Speed Networking, or want to learn more about Whova’s other opportunities for interaction and engagement at virtual and hybrid events? Request a free demo today.