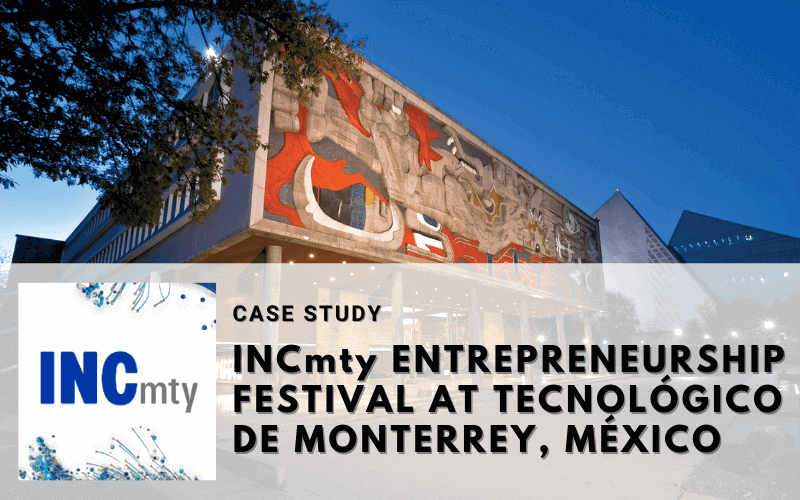 INCmty is one of the largest entrepreneurship communities in Latin America positioned since 2013. The event connected the agents involved in the different stages of entrepreneurship.

INCmty is also made possible with the participation and collaboration of many people, institutions, and alliances that have been cultivated with leading organizations such as Amazon, Heineken, IBM. Through Whova’s exhibitor booths they could showcase their products, job opportunities, special discounts, and engage in networking options. As part of the global entrepreneurship week, over 7,700 attendees streamed into the event from over 70 countries. With Whova’s assistance, the organizers targeted session access based on ticket types and inspired networking through Speed Networking, video calls, and online meetups.

This event is a valuable opportunity to network within Latin America’s active entrepreneurial community. The organizers wanted attendees to have the chance to chat and meet each other through face-to-face video calls.

As an entrepreneurship festival, they wanted to motivate entrepreneurship spirits by providing a virtual space where attendees could present startup pitches and obtain valued feedback from their peers.

This was the first time the organizers would facilitate a career fair online. It was important companies could recruit potential employees and even host video interviews on the spot.

With valued sponsors joining from IBM and Heineken, the organizers wanted their logos and products to be prominently displayed in the app to ensure they left with a high ROI. They needed to showcase higher-level sponsors with greater visibility in the app.

With nearly 8,000 attendees, it was going to be challenging to engage such a large crowd during speaker sessions. They needed in-app tools to help connect attendees with the speakers and each other.

With different types of content available for attendees, the organizers wanted to quickly share all recorded content with attendees in the same space as the live streamed sessions.

The organizers created multiple Speed Networking sessions, open to all attendees, in Whova’s agenda to facilitate face-to-face connections. When attendees joined a live session, they were randomly placed into a video call of 2-4 attendees and then shuffled into a new group after a designated amount of time set by the organizers. Attendees had many opportunities during the 30-minute sessions to meet new people and share entrepreneurial ideas. If the organizers were worried attendees might forget about the unique networking sessions, they could set an email reminder the automatically send before the sessions began.

Whova’s Artifact Center, which the organizers named the Startup Show on the app, was an ideal space for collaborating on and sharing startup pitches. Presenters simply uploaded all their materials, including posters, videos, photos, and more, through personal links sent by the organizers. After attendees had the chance to visit the virtual booths, they voted in Whova’s Pitch Competition for the most innovative startup and the one with the most potential. The competition was a great way to encourage attendees to actively visit booths and provide the most value for presenters.

We wanted to provide the ideal space where entrepreneurs could grow, so in addition to our high-level speakers and networking [opportunities], another challenge was creating a space to present startup pitches and host a vote for attendee’s favorites. The Artifact Center (which we call the Startup Show), adapted very well to our needs!

ITESM, INCmty Production and Operations Coordinator, and Organizer of INCmty

The Community Board, an online chat forum, was a popular feature attendees used to participate in discussion topics and share valuable articles. The virtual meetups were a great opportunity to connect face-to-face and meet fellow attendees. Attendees could also introduce themselves with fun icebreakers about their favorite travel spots or personal hobbies. They could easily search for fellow attendees through the attendee tab and send a 1:1 message.

The organizers set up Whova’s photo contest to encourage attendees to share their event moments on the Community Board. Attendees could take photos and directly upload them onto the app, and at the end of the conference, the photo with the most likes won a prize from the organizers.

Leading companies across the world joined the event’s virtual Career Fair through Whova’s platform. Companies easily uploaded their information to the virtual booths using personal links sent by the organizers. They could include recorded videos describing their companies values, contact information, photos, handouts, and job openings.

Attendees could like the booths, chat with the staff, and submit resumes and cover letters for positions they were interested in. If companies liked an applicant, they could conduct a 1:1 video call by scheduling a meeting on the app. In the Career Fair tab, attendees could see popular job openings by viewing how many likes, visits, and applications each booth received. If they missed a job opportunity during the live event, they still had full access to the app one month after it ended so they could continue applying for jobs. 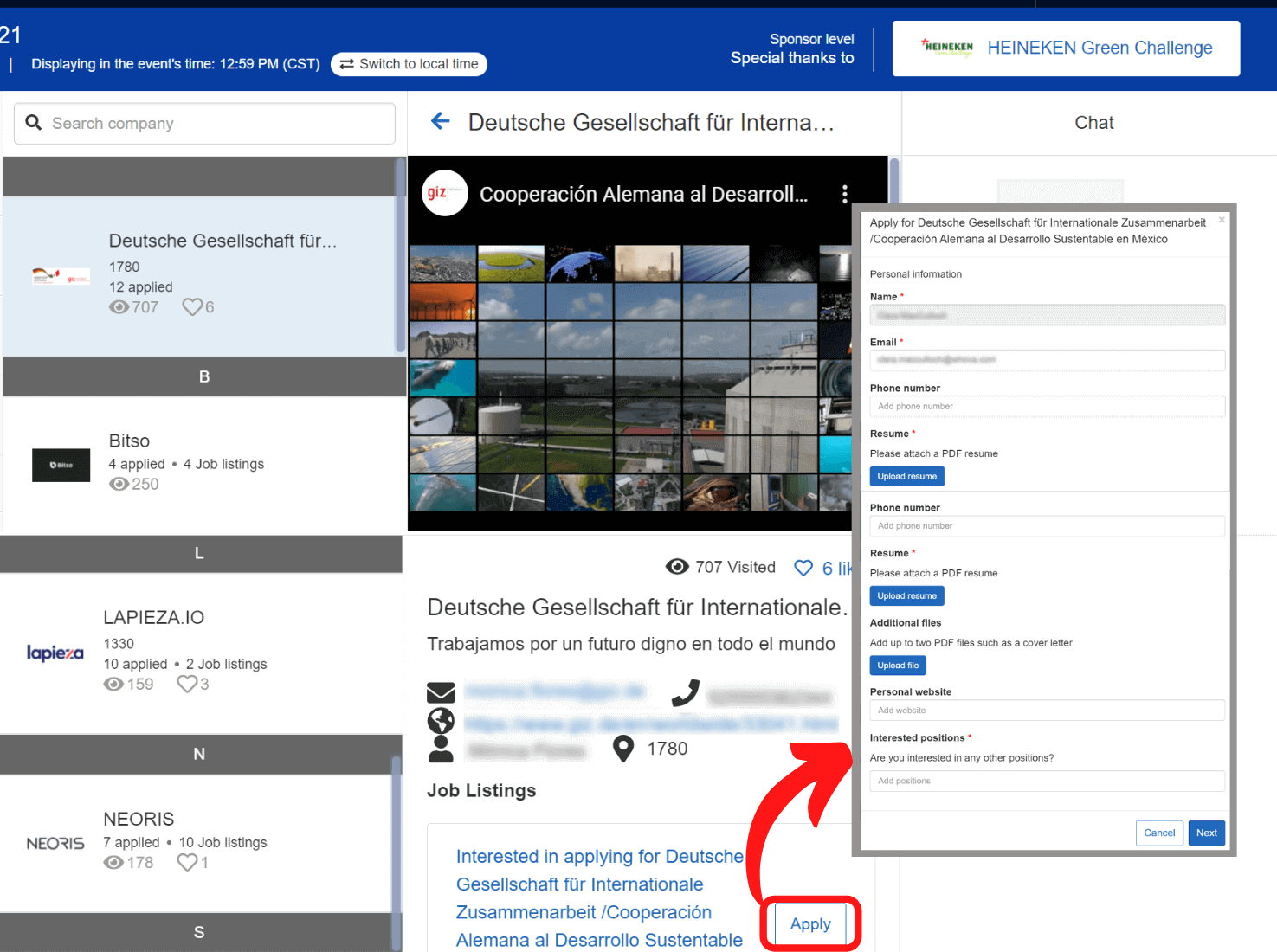 Attendees could apply for jobs directly through the virtual booths

Similar to the career fair booths, the virtual exhibitor booths allowed sponsors to upload promotions, contact information, videos, handouts, and more. Each time an attendee liked or commented in the booth chat, they were automatically recorded as leads.

The passport contest further incentivized interactions between attendees and exhibitor booths by automatically entering attendees into a raffle once they collected at least 50 stamps. Attendees could earn stamps when they signed up for promotions, commented, or liked booths. Attendees could monitor their progress throughout the event, and at the end, the organizers announced the winners through the app.

The organizers showcased the event’s main sponsors on the app’s home page, with rotating banners by the event title. They also strategically showcased sponsors in the agenda, speaker, and web pages.

The organizers easily uploaded attendee ticket information through Whova’s pre-made excel sheets and assigned tickets to all or specific sessions. Attendees could only access the sessions or days their tickets were assigned to. Besides separating content access based on ticket types, the organizers could also target announcements for certain tickets or attendee categories. This made it easy to separate relevant information between speakers, exhibitors, and other types of attendees and entrepreneurs.

Session live polls were a fantastic way to keep attendees interested during virtual sessions. Speakers could ask industry-related questions and spark discussions over the live poll results. The organizers could also schedule polls to show up at any point during the event to ask attendees about event satisfaction and more.

During live sessions, the session Q&A allowed attendees to ask and like questions through the app. The most popular questions automatically moved to the top of the list for speakers to see first, or moderators could manually move questions to a higher priority. All polls and Q&A sessions were listed in the app’s Resources section for attendees to access in one spot. 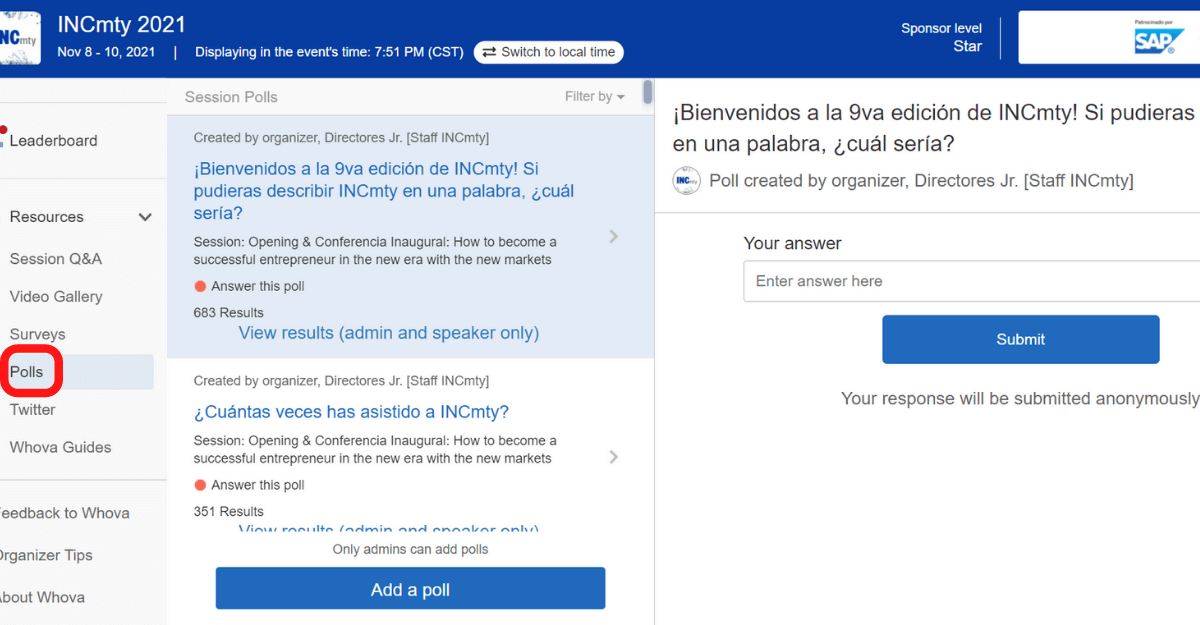 The organizers conveniently streamlined the process of setting up live streams with Whova’s advanced live stream integration. They could embed the streams directly into Whova’s platform so speakers could present from a platform they were familiar with while attendees could watch directly in the app. Each session could include a recorded video along with the live content, so attendees had multiple ways of viewing a session. They could remind attendees of access to on-demand content through the app’s Announcements.