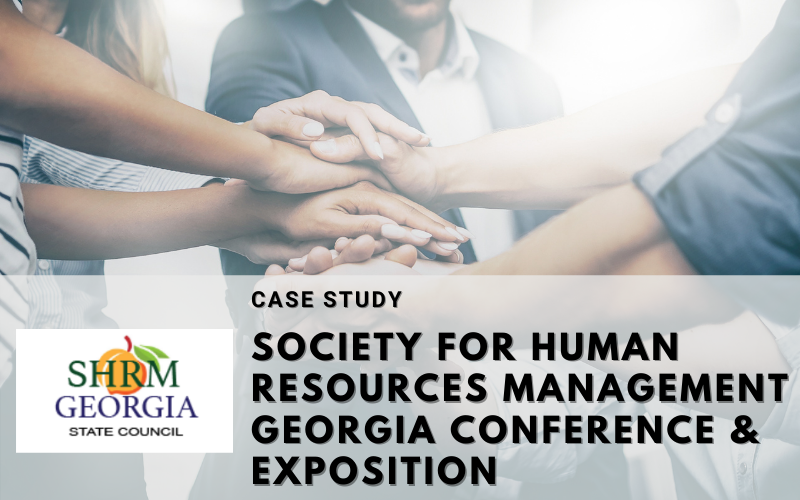 The SHRM Georgia chapter held their annual conference in person for the first time since being virtual for over a year. Despite fears about COVID restrictions, the event was engaging and interactive for both attendees and exhibitors.

The event supported nearly 40 prominent speakers, many of them being CEOs, entrepreneurs, founders and presidents of various organizations in HR.

“We utilized the Whova app and had a wonderful experience with our attendees.” Brad Patterson

Interview with the Organizers

The Society for Human Resource Management (SHRM) is an organization dedicated to advancing and elevating human resources. Founded in 1948, they have since connected over 300,000 members across the globe to help create better workplaces. Through their work, they have positively impacted the lives of over 115 million workers and families worldwide.

Because SHRM transitioned the event back in person since being virtual the year before, the organizers needed an easy way to answer attendees’ many questions about returning to an in-person event.

The SHRM organizers wanted to ensure attendees had plenty of opportunities to meet industry peers and connect with exhibitors after only being able to engage virtually the past year.

While the majority of the exhibitors were at the physical event, four booths chose to participate fully online. Because all the attendees were in-person, the organizers wanted to ensure that both the in-person and virtual exhibitors had high returns of investment.

With sponsors contributing at varying levels, the SHRM organizers wanted to be able to showcase the larger sponsors more prominently in the Whova app.

The SHRM organizers anticipated attendees would have a lot of questions about the in-person event. To alleviate any concerns, they encouraged attendees to post their questions on Whova’s Community Board before the event even started.

Under the Community Board discussion topic, “Ask Organizers Anything”, attendees could post questions about face covering requirements, lunch options and hotel entrance fees. The feature helped organizers avoid redundant questions, as anything posted on the discussion board was visible to everyone.

Besides answering attendee questions, the SHRM organizers sent out announcements on the app in the weeks leading up to the event. These announcements also showed up in the Community Board, making it easy for attendees to access everything in one place.

Exhibitors were also able to contact attendees prior to the event in order to create interest in their brands. With access to Whova’s automatically generated registration lists, the exhibitors could email attendees before the event and encourage them to check out their booths. 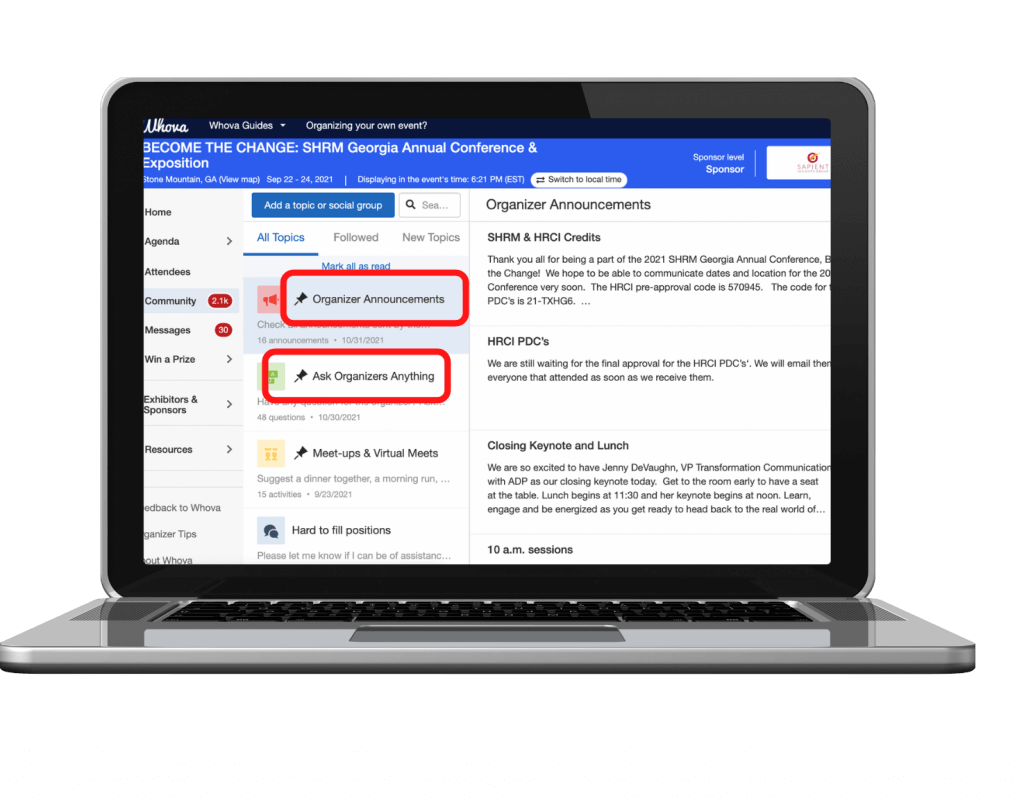 Whova’s Community Board turned out to be a huge success at the event. The online chat board included organizer announcements, meet-ups and discussion topics created by the attendees, exhibitors and organizers.

The icebreaker feature was especially popular among attendees and exhibitors. Exhibitors utilized it to briefly explain their brands while attendees answered icebreakers about favorite animals or vacation spots.

Many attendees also posted discussion topics about personal hobbies or industry news. Besides participating in online chats, attendees also suggested meetups on the Community Board, including anything from ride sharing to dinner ideas.

Whova’s online booths were a great way for in-person and virtual exhibitors to network with attendees and leave the event with a high ROI. The exhibitors utilized the app to directly message attendees or set up meetups on Whova’s Community Board. The feature was especially productive for virtual exhibitors, as they were unable to meet attendees at the physical event.

Besides uploading live streams, photos and contact information, the exhibitors were able to advertise prizes and raffles. Some in-person exhibitors promoted free dinners for the first 5 attendees to visit their booths.

Whova’s platform automatically collects profile information when attendees interact by liking or commenting in the virtual booth, making it easy for exhibitors to gather leads.

“The app was lit up with comments and interactions with the virtual exhibitors. Several said they were looking forward to coming back next year!”

The SHRM organizers were easily able to categorize sponsors under different levels of visibility through Whova’s Sponsor Center.

Exhibitors could also sponsor individual sessions to have their name and logos displayed along with the session details. 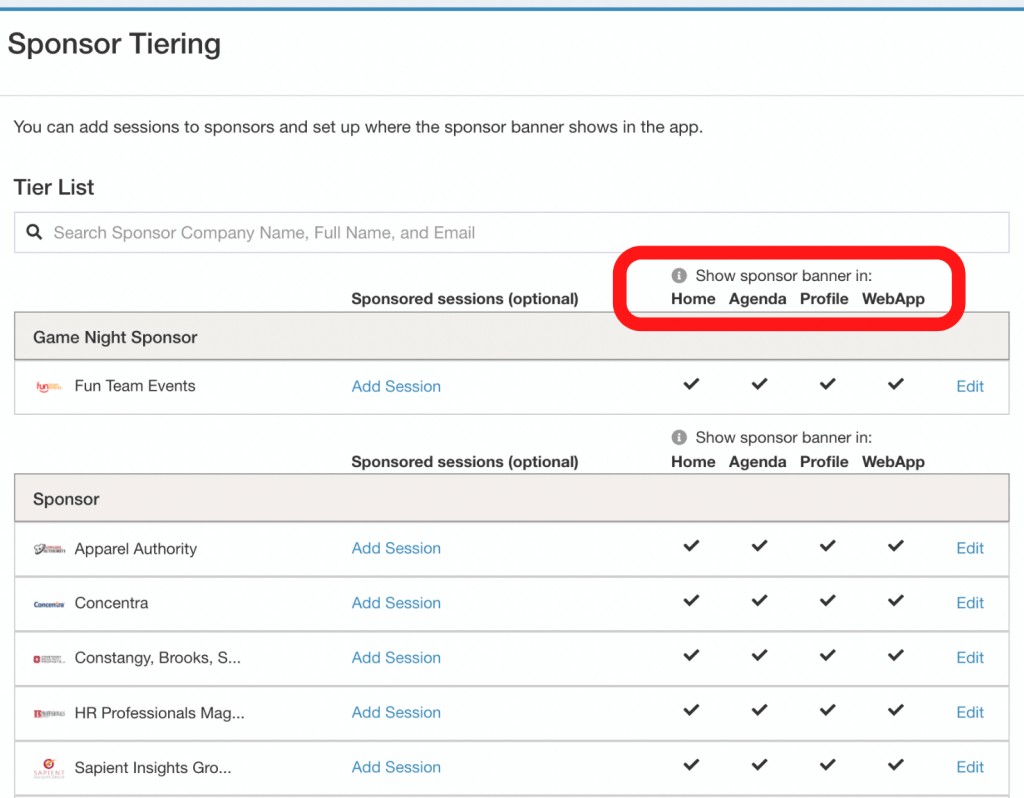 The SHRM organizers were able to motivate community engagement with Whova’s Community Leaderboard Contest. Attendees earned points by participating on the Community Board and answering surveys and polls. Participants with the most points at the end of the conference were awarded a small prize by the SHRM organizers.

The organizers also engaged attendees with Whova’s photo contest. Attendees simply uploaded photos on the app to enter the contest. The picture with the most likes on the last day of the event was announced as the winner on the Community Board.

“We had two people in our conference [SHRM Georgia Annual Conference and Exposition] this year that each got over 400,000 points from posting in the app, it was insane! We ended up giving out two prizes because they were so neck and neck.”