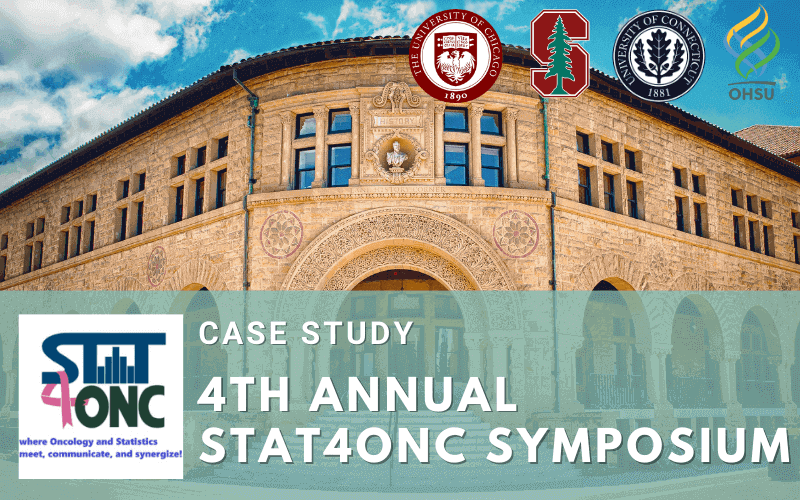 The 4th Stat4Onc Annual Symposium successfully brought statisticians and oncologists together online to discuss challenges in oncology with the support of Whova’s all-in-one event management platform. The event is usually held in person, but with Whova’s assistance, they were able to quickly pivot online in light of new Covid-19 restrictions.

Stanford University, the University of Chicago, the University of Connecticut, and Oregon Health Science University jointly sponsored the event to ensure participation from researchers across the globe. Using Whova’s online agenda, the organizers easily managed a complicated agenda and gathered attendee feedback to prepare for next year’s event.

[Whova] is powerful, intuitive, and efficient. The platform itself is built to help organizers make online conferencing smooth and easy.

About the 4th Stat4Onc Annual Symposium

The conference originated in 2015 when professors from Stanford University and the University of Chicago noticed a gap between statisticians and oncologists. They wanted to create a space to share research and discuss challenges and opportunities in oncology. As a first-time virtual event, the organizers made sure attendees could interact during live sessions with Whova’s engagement tools and easily shared session recordings in the app.

Because there were many different types of sessions, and some were for invited attendees only, the organizers needed a way to separate them in the online agenda for attendees to easily differentiate between.

The organizers planned to record live sessions to share with attendees if they missed a session or wanted to rewatch an important talk but needed an easy way to distribute the recordings to attendees.

Keeping an audience engaged over Zoom can be challenging, so to assist speakers, the organizers wanted to make the online rooms as captivating as possible for the attendees and speakers.

As a freshly virtual event, the organizers wanted to hear from their attendees and gather valuable feedback to improve future events, whether they were in-person or virtual.

Whova’s virtual Track Manager made it easy to organize a complicated agenda. The Stat4Onc organizers could tag multiple topics in color-coordinated tracks on the agenda to separate between keynote sessions, invited sessions, short courses, and more.

The feature was also great for letting attendees quickly identify sessions they were interested in and add to personal agendas, making it easier to navigate sessions across multiple days. 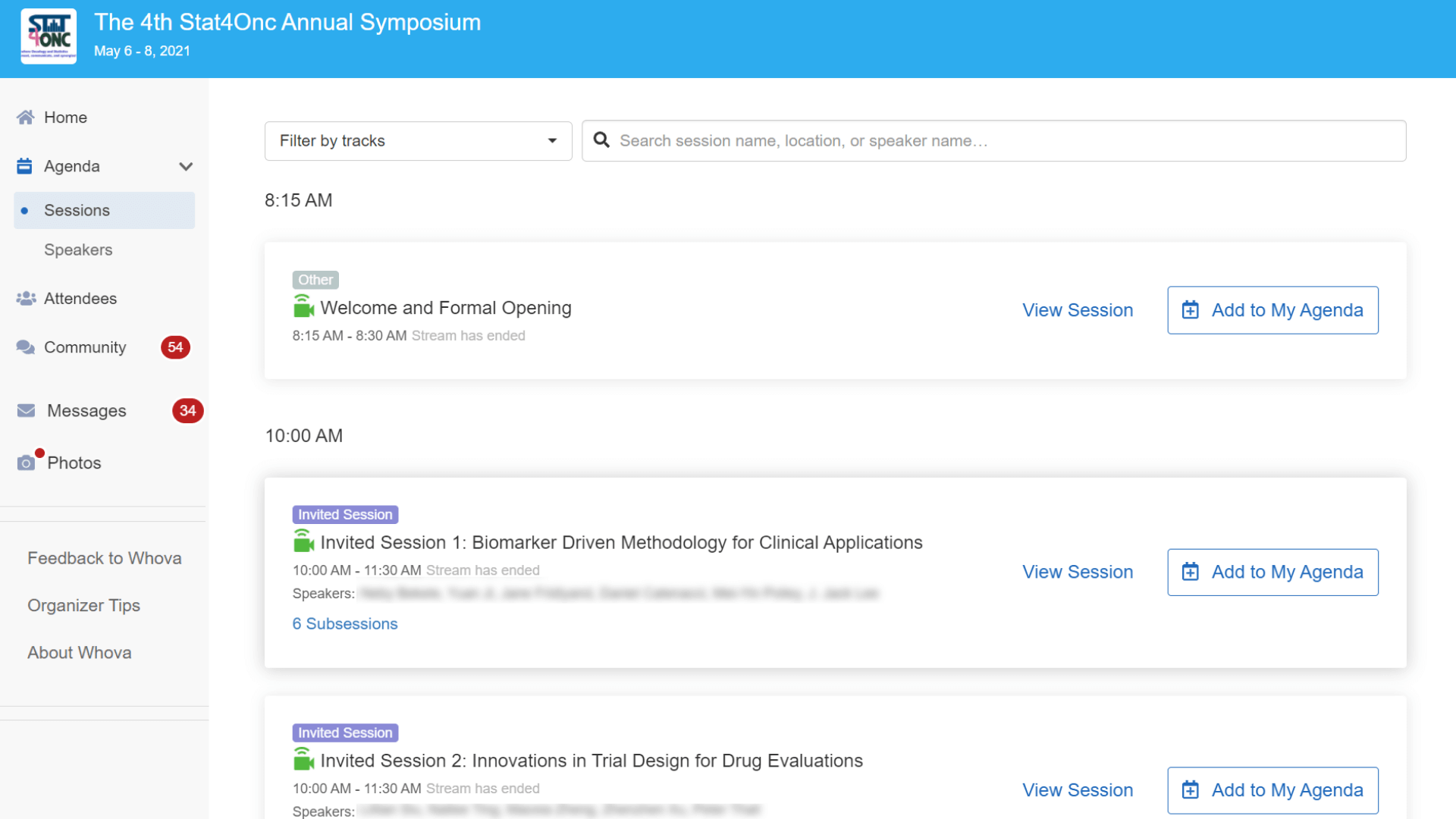 The app’s video gallery was a valuable feature for both the attendees and organizers.

The organizers simply uploaded recorded videos to the platform, and attendees could watch them directly from the web or mobile app.

The organizers also kept the app open for six months after the event, allowing attendees freedom to access the recorded sessions at any point during that time.

Attendees at the Stat4Onc event utilized the Q&A feature to directly ask questions during live sessions. They could inquire about the location of session slides or ask the speaker to elaborate on any topics.

Attendees could view all the questions in the app and like questions they were also curious about. The most liked questions moved to the top of the list for the speakers to answer first. Moderators could also move questions manually or delete any inappropriate questions.

The organizers effortlessly collected event feedback during and after the event with Whova’s surveys and polls. The fully customizable forms let them ask any specific questions they wanted.

The surveys saved the organizers and attendees time, as organizers did not have to waste time emailing forms; they could post the surveys for attendees to answer right on the app. All answers to the polls remained anonymous so that attendees could feel comfortable providing honest feedback.

Conference participants can easily communicate and connect on the Whova platform and access the meeting materials within six months after the events, which makes the online experiences pleasant and rewarding. We could not be happier with Whova’s support and recommend it to anyone who organizes virtual or hybrid events.