When you’re at an exhibitor hall, what makes you walk up to a booth? Often, it isn’t just one thing — it’s a pleasing setup that catches your eye, an exciting promotion, the name of a company that you’ve been interested in checking out. In other words: the whole package, which makes everything from the floor layout to a good-looking booth design essential.

It’s no different when displaying exhibitors online, which is why Whova has updated the exhibitor hall with these brand new features:

Whova’s exhibitor hall is centralized, easy to navigate, and provides more visibility for exhibitors than ever before. With Whova, you can give exhibitors the benefits they’re looking for and increase event revenue as they update to higher tiers and choose to come back year after year.

With this latest update, you can create tiers and assign them to exhibitors interested in paying for increased visibility. Whova now allows you to decide the order virtual booths are viewed based on their tiers, rather than just listing them in alphabetical order.

This means that high-tier exhibitors don’t need to worry about potentially losing out on benefits just because their company name happens to start with a Z; the higher the tier, the better exposure an exhibitor can have. This effectively brings them higher ROI, and in turn, increases your event revenue from exhibitors who are willing to pay more to be seen first. 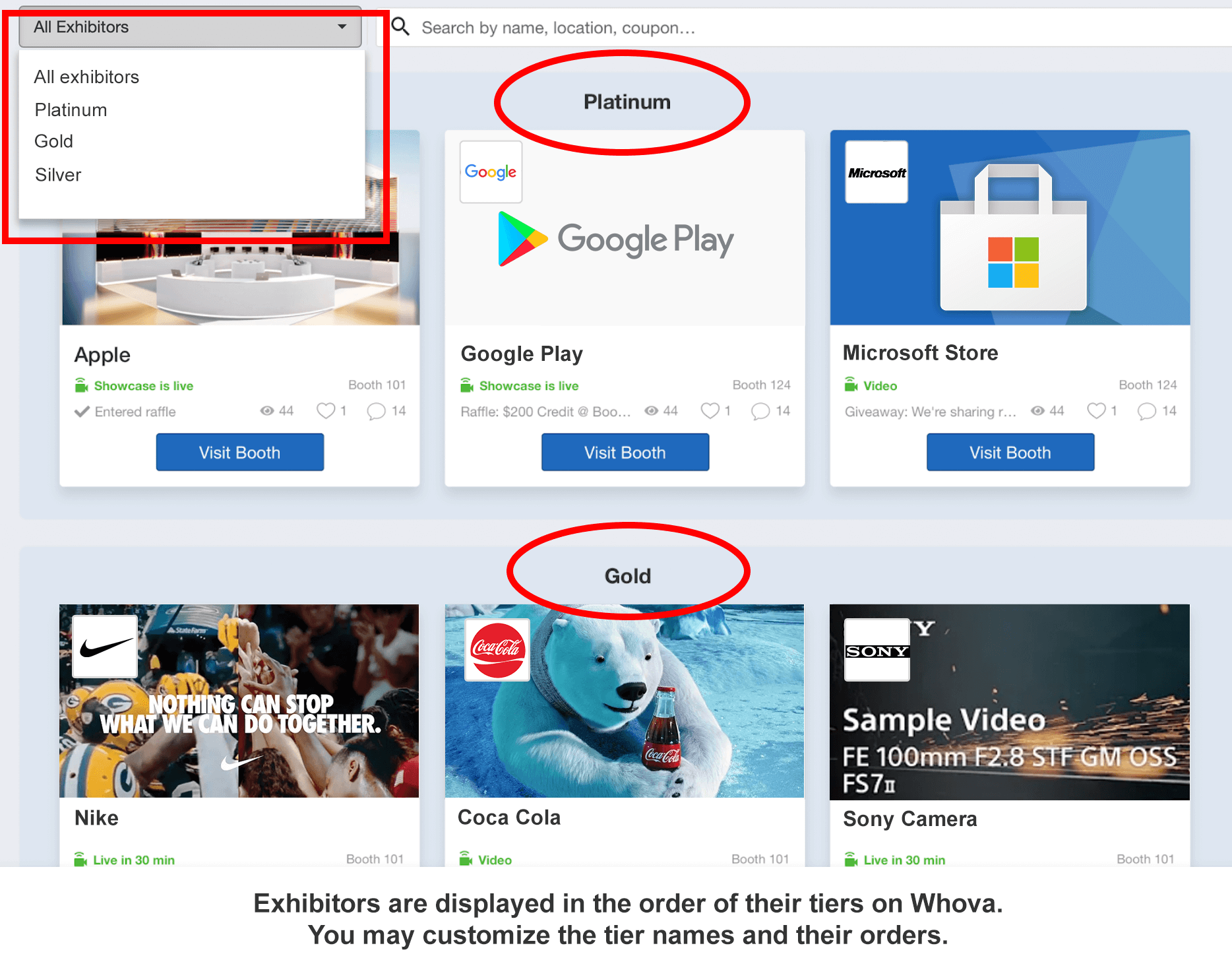 You can create as many tiers as you want, customize the tier names, and add as many exhibitors to each tier as needed. Did someone upgrade their package, or do you need to make other changes to the exhibitor tiering? No worries — you can easily manage and change tiering in just a few clicks.

With the new Gallery View, the exhibitor hall has a sleek new layout, providing attendees with an attractive, professional look into what the booths have to offer. As soon as they enter the event’s exhibitor hall page, attendees will see all the booths laid out in a highly visual and central location. 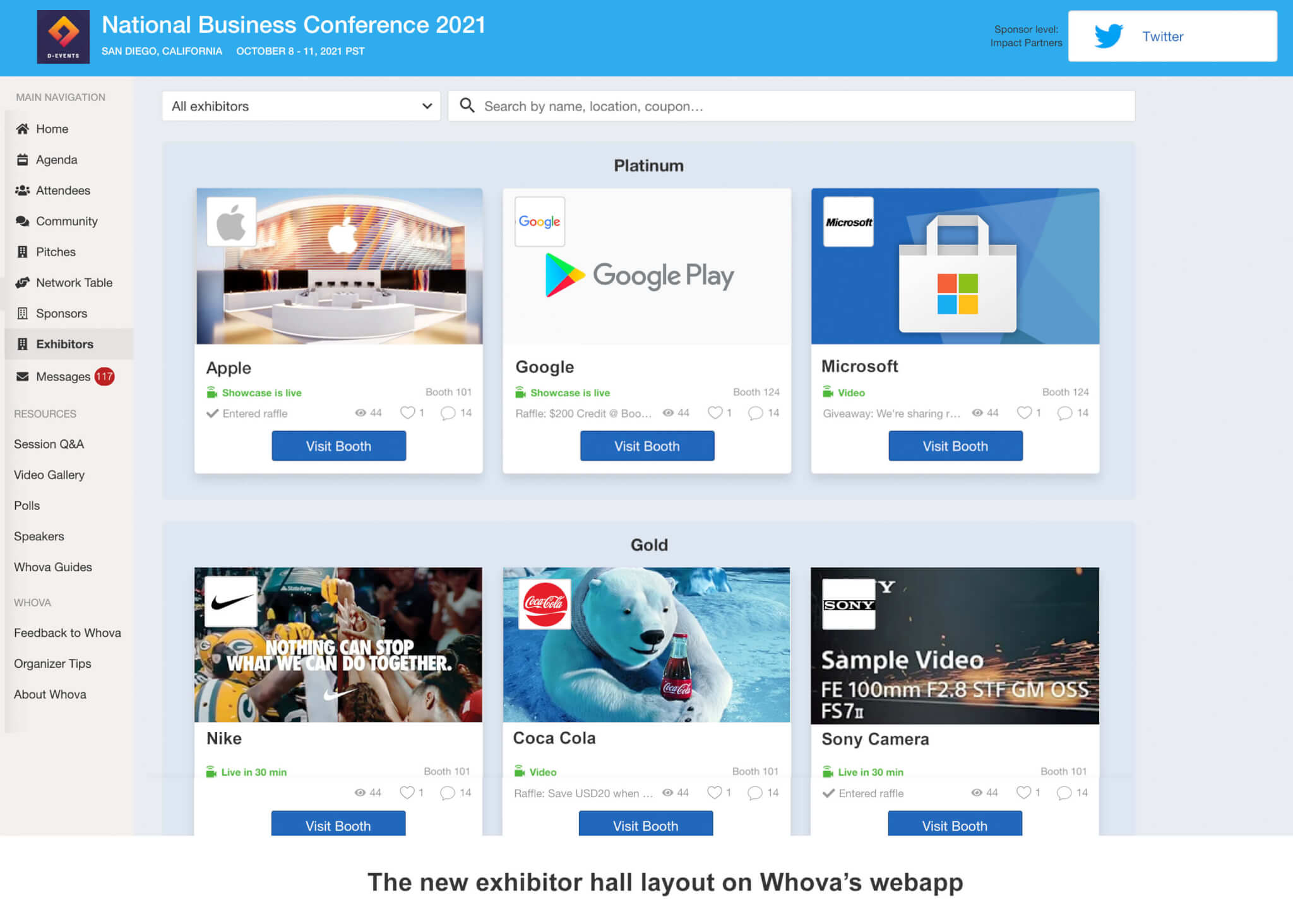 In addition to featuring the highest tier attendees at the very top of the exhibitor hall, Gallery View also provides greater visibility to more exhibitors. While in List View you might have worried about attendees only clicking on the first few booths, Gallery View’s spaced-out layout helps attendees take in a greater variety of booths, allowing more than just the first few exhibitors to pull attendees in with eye-catching profiles.

Exhibitor videos are also more interactive and accessible. Attendees can conveniently watch videos as they browse through Gallery View. They just have to hover their mouse over the exhibitor to make the video play, giving exhibitors more opportunities to showcase their company.

Still prefer List View? Not a problem! While Gallery View is Whova’s new default, you can customize the layout to match what works best for your event, meaning you can always change back to List View if you prefer.

Update your event with a more advanced exhibitor hall

Whether your event is virtual or in-person, Whova’s exhibitor resources can be a critical way of giving your exhibitors the visibility and ROI they’re looking for. With these updates to our layout and new controls over exhibitor benefits, you can help exhibitors attract attendees and generate high-quality leads, inspiring them to return year after year and even update their package to a higher tier.

No matter the needs of your event, Whova is determined to help you make it a success. If you’re interested in learning more about our exhibitor features, or curious about the platform in general, sign up today for a free demo.