Case Study: How Submarine Institute of Australia Launched a Smooth and Engaging Hybrid Event with Whova

You may have used Whova in the past for virtual events, or for in-person events before that, but did you know that Whova also supports hybrid events? Recently, we spoke with Frank Owen, an organizer with the Submarine Institute of Australia (SIA), who held a successful hybrid conference with Whova last November.

SIA typically holds several conferences a year, all located in Australia but with regular international attendance of researchers, veterans, engineers, and many more. In early 2020, when the worsening pandemic made it clear that they would not be able to hold the 10th Biennial Submarine Institute of Australia (SIA) Conference in person as planned, they made the early decision to commit to a three-day hybrid conference.

With nearly a year to plan, Frank and the rest of SIA’s event organization team were able to fully commit to finding ways to make the virtual elements of the event just as dynamic as the in-person ones, from innovative ways of combining remote and in-person speakers to supporting both sides with Whova’s all-in-one event management system.

Smoothly streaming sessions to both remote and in-person attendees

Frank had a unique strategy when it came to approaching sessions: thinking of it as a TV show. The entire conference, including appearances by remote speakers, took place on one stage where they were professionally shot by a production crew, streamed through Vimeo Live, and embedded with Whova, where they could easily and conveniently access all of Whova’s other engagement and networking features. Frank likens it to “having a live stage show that’s being broadcast.” 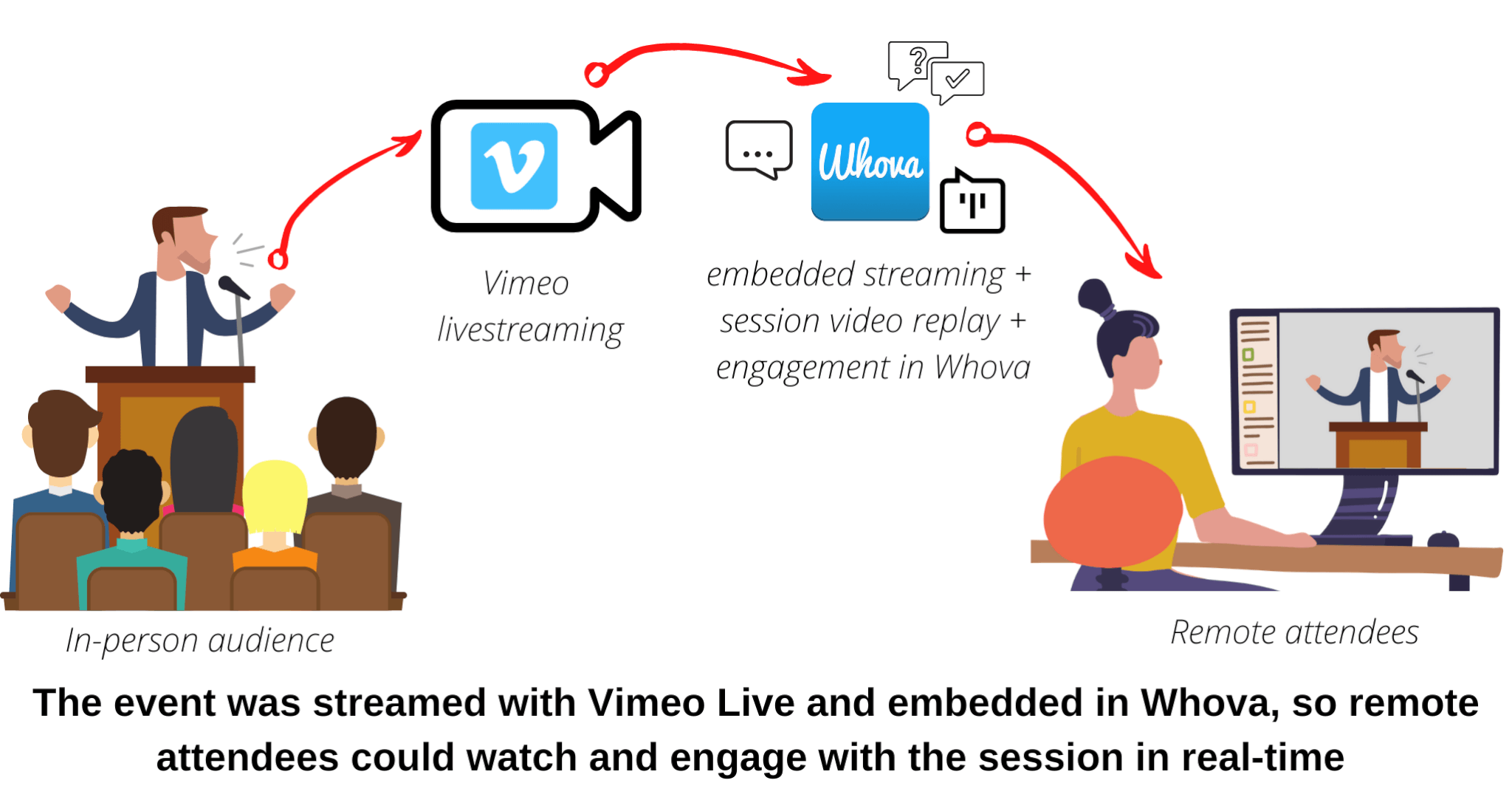 Once the session was done, they uploaded the recorded video of the conference to the same Whova session remote attendees watched the livestream through, making sure the recording was only available to his audience, rather than the whole internet. While some might have concerns about whether attendees will go for professional tier content in an age of free webinars, the SIA Conference found that their investment paid off.

Engaging with Q&A from both audiences

While the sessions were all held in person, the engagement came remotely, with even in-person attendees participating through Whova’s mobile Q&A. Rather than prioritizing one group over the other, the SIA Conference had all attendees submit their questions through the same function and had a staff member dedicated to monitoring the submissions and asking the panelists and speakers the top questions. 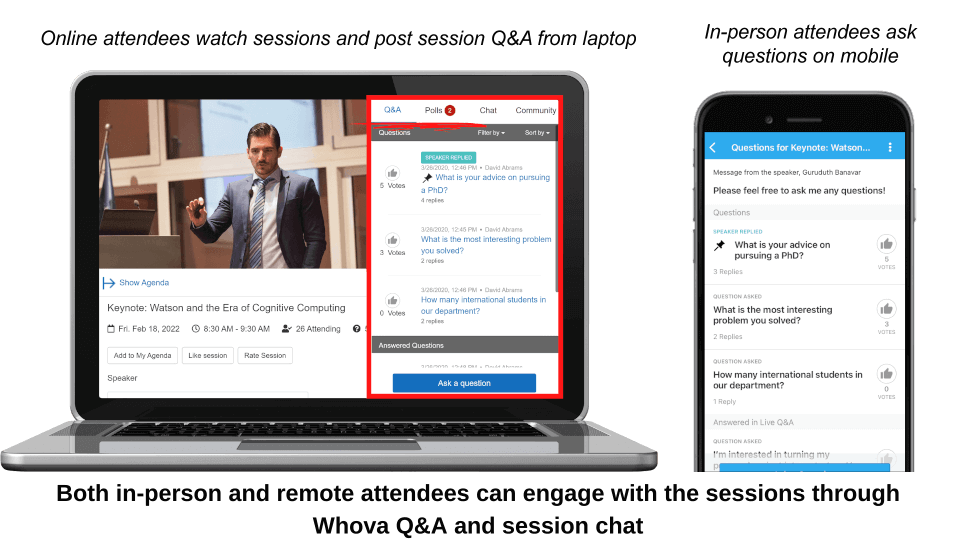 In addition to Q&A, attendees could also answer questions with Whova’s live session polling and join in on the discussion through session chat. It didn’t matter whether attendees were at the conference or sitting at home; they still got the same opportunities to participate either way.

Featuring both remote and on-site speakers

While the SIA Conference brought many local speakers onsite, some speakers were unable to attend due to COVID restrictions or distance. Nevertheless, the event was still completely live.

In order to handle the two types of speakers, the organizers used onstage screens to show remote speakers to the live attendees while also broadcasting the speaker’s video directly through Whova to remote attendees. For panels, they actually brought smaller television screens featuring different remote panelists onstage along with the in-person panelists, creating an intimate, round table discussion even if some of the panelists weren’t on location!

While it can feel like a feat to bring together two audiences miles away from each other, with the right tools, it doesn’t need to be. Whova has a variety of features that both in-person and remote attendees can use to connect with each other, such as the networking tables, in-app profiles, messaging, social groups, the Community Board, and one-to-one video calls.

While the SIA conference did not take advantage of some of the networking functions, Frank says a priority for future conferences will be leveraging these new tools now that he knows they’ve got the logistics of the hybrid format down. Even so, the in-person and remote audiences continued to connect through Whova’s engagement features, like joining discussions through session chat, bringing them together through relevant conversations.

Delivering strong ROI to sponsors and exhibitors, and more

The hybrid format actually proved to be full of opportunities to support sponsors. Taking advantage of the television-like setup, the SIA Conference promoted their sponsors during an “ad break” in between sessions and during session introductions. They also gave sponsors further visibility with Whova’s in-app sponsor banners, tiering options, and virtual booths.

The SIA Conference also made sure to take advantage of Whova’s features for supporting exhibitors, speakers, and more. As the conference went on, they used Whova’s Exhibitor Hall and Career Fair functions to hold both these elements completely virtually. Both remote and in-person attendees visited virtual booths outfitted with videos, live presentations, documents, and in the case of the Career Fair, in-app applications.

They could also virtually connect with booth staff through chat and one-to-one video calls. By using Whova to keep these components entirely online, the SIA Conference was able to forgo having to set up physical booths while still putting exhibitors and recruiters in contact with as many people as ever.

In order to accommodate time zones and manage speaker information from a wide variety of locations, the organizers also used Whova’s Speaker Center function. Not only does the Speaker Center save time for speakers and organizers alike by allowing them to upload their own bios, social media, and other information, but it also enables them to set up their own livestream and video links and make any updates themselves — particularly important for a hybrid event that has speakers from around the world dropping in!

Bring your event to the next level with the best of in-person, hybrid, and virtual events

No matter your hybrid event strategy, it’s important to have a strong system supporting it. Whova has features suited to virtual, hybrid, and in-person events. It makes it easy for you to take what works for your hybrid event and bring attendees together whether they’re at home or in-person.

If you want to know more about using Whova for your upcoming event, sign up for a free product demo.